April Phillips gets her shoe in the door

Craft Victoria recently awarded the 2008 Emerging Artist Initiative grant to shoe-maker and designer, April Phillips. We mentioned April's win here not too long ago, and some of you may remember April's recent collaboration with Tim Fleming on the fabulous Pretend Plants installation (which you can view here) during A Month About Making.

From September to December, April be based in Sydney, splitting her time between research at the Powerhouse Museum under the direction of Curator Peter Cox and intensive training under the tutelage of costume shoe designer/maker Jodie Morrison.

April will create a new body of work based on primary research into the history of Russian circus performers The Zig Zag Troupe. During the gold rush era The Zig Zag Troupe toured extensively throughout Australia and their performance costumes (along with other objects and ephemera) are now housed within the collection of the Powerhouse Museum. April left for Sydney at the start of September and has had an interesting time so far: 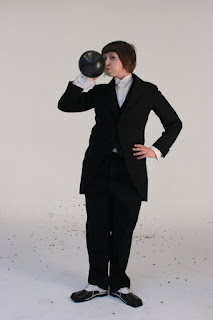 History is the word of the week.

I arrived in Sydney at 7.30am, dumped my bags, had a coffee, and raced to the Powerhouse Museum for my first day. I think the fatigue of the early morning flight created a blurry view of the world - but I knew when I arrived at the Museum that I was awake. The ground shakes a little when the prospect of something happening transforms into the reality of it happening right now.

Peter Cox (my research mentor), shortly after introducing himself, takes me to my desk. Along the way, he took me through the history of the buildings and museum itself.
History is the word of the week. In fact it is history week at the Power House and many other museums in greater N.S.W. This means many interesting lectures on a huge range of subjects. On my first day I was lucky enough to see Charles Pickett deliver a talk about stadiums and swimming pools as a product of the modern movement. Two days later Peter Cox gave a lecture about Annette Kellerman (or Kellermann as she was know earlier in her career) who was a famous Australian swimmer, performer and silent film star.

Second day I am right into the blue files, which contain research already undertaken, catalogue details, conservation reports, and any related material. I realize how huge this project is going to be. The Jandaschewsky family tree becomes complicated when you include inter relationships, performing names, changed names, and origins. The written documents are often in the most flamboyant handwriting I am ever likely to see and could be in French, Italian, Russian, Spanish or broken English.

I am definitely enjoying breaking up the research by spending time in the Rexas room which is where the objects get delivered to from the basement (otherwise known as 'Z') for viewing. The Rexas room is a kind of visual lucky dip. Who knows what else has been brought up for other people to look at?! Behind me is 'Pink Diamond' - the costume Nicole Kidman wore in the film Moulin Rouge. To my right is a stack of boxes containing Comme Des Garcon clothing and over the table in front of me is a handmade dolls house mansion!

The fragility of the objects requires a slow pace, as well as a lot of concentration in the handling – this can leave me in the calmest of moods.
Standing in front of objects in real life is nothing like seeing a photo, there is a sense of history that envelops every object. I feel like I am starting to get to know the members of the Zig-Zag troupe. There are a lot of questions I need to find answers to, and a lot to take in.

Hopefully by the next entry I will know more about who Alice is, have completed a full family tree, and will decode the written documents.