Following on from yesterday's visual post on Julia's current exhibition, today CLOG presents her carefully-penned artist statement which includes a history of the ossuary. There seems to be a running theme here at CVHQ! 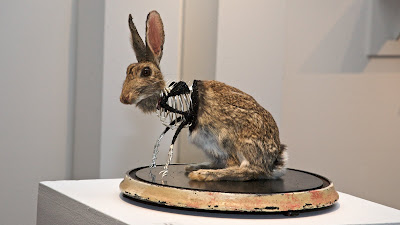 Throughout the ages’ coffins, skeletons and deaths heads (the skull and cross-bones) have been used to symbolise the imminence of death and our own mortality.
The ancient Egyptians would present a miniature coffin containing an image of a corpse to each guest at their banquets, to remind them to enjoy the moment.
A marble funerary slab found in Rome dating back to the second century has a relief of a human skeleton and a Greek inscription translating to “Passer by, as you look at a fleshless corpse, can you say whether it was Hylas or Thersites?” Hylas, one of the Argonauts, was the epitome of male beauty, while Thersites was renowned in Mythology for his ugliness. This inscription is making fun of the vanity of both the living and the dead. The skeleton was a symbol of the fleeting nature of life and the need to enjoy each moment as it comes.

SELDEC OSSUARY IN KUTNA HORA
In 1278 the Cistercian abbot of Sedlec, travelled to Palestine and the ‘Holy Land’, bringing home a sample of earth from Golgotha, which was sprinkled over the grounds of his local cemetery upon his return. The grounds were immediately considered scared, and hence became a much sought after location for relatives to bury their dead. In the 14th century, the bubonic plague spread across Europe and now 30,000 bodies all wanted a resting place within the sacred grounds. Such vast numbers of dead bodies led to the creation of the ossuary in 1511 by a half-blind monk who gathered up the bones to be stacked up within the ossuary, making space for new corpses, which were soon taken up by more victims from 15th century Hussite Wars.
Frantisek Rint, wood carver and artist was employed by the Schwarzenberg family to imaginatively compose the bones into works of art; amongst his creations came the Schwarzenberg family’s coat of arms, and a chandelier containing every bone in the human body, composed of several bodies.

I am fascinated by the way the skeleton, especially the skull, has been used in history as such a powerful symbol of human mortality. I am also very interested in the way it has recently become a pop culture icon, which for me, has taken most of the impact out of its symbolism.
I am aware that some people may not be as comfortable with human remains as I am but I do not intend to shock or upset anyone. I have found that a real human skull still generates a strong emotional response in people and this is why I have chosen to use it.
I have used human bones in their original state along side ones that have been flocked or glittered as well as reproductions, with the intention to generate questions and discussion about why we are shocked by the thought of real human bones when the image/symbol of the same has lost all meaning.

All human remains have been legally obtained.
For further information, please email media@craftvic.asn.au
From Craft Victoria