Both fresh graduates from RMIT's Industrial Design course, Ben and Brittany's exhibition examines and explores ways of enhancing city life, one organic accessory at a time. CLOG has waxed lyrical about BIO-ACCESSORIES plenty of times this week, so here's a link to read more and view more. 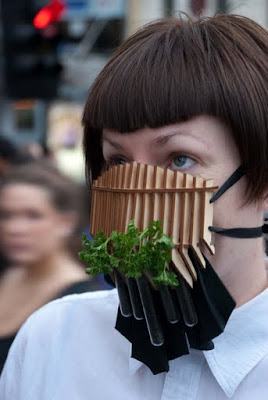 Is this the first time that the both of you are working as a pair? How did you meet and decide to embark upon this project together?

BRITT: This is the first time we’ve worked together just the two of us, but we have worked together in a larger group. We worked with two others (James Secombe and Braden Keir) on Paper Jam, which was a puppet show set inside a filing cabinet, which we made for a uni project, then took to Melbourne Uni Drama Festival, and then won an award to present at Fringe. So, this is the first time Ben and I have worked as a duo.

BEN: I had some ideas to do with wearable headpieces inspired by privacy in the city – I would always walk around Melbourne with my Mum, who couldn’t resist window shopping. I wanted to make some sort of guerrilla fashion inspired by horse blinkers – to focus my mum on the task at hand instead of being distracted by the pretty frocks in the windows of Little Collins Street.
When I brought this idea to Britt, we took the idea and ran with it, and ended up talking more about the privacy which ‘blinkers’ would provide, and then set about designing other accessories which could assist city dwellers, and improve on their urban wellbeing. The plants and animals came later as a substitute pet type arrangement!
This beginning was a good start to our working relationship, as we were open with ideas from the start and nothing was too silly. We were happy to put crazy ideas on the table, and not be afraid they would get shut down. 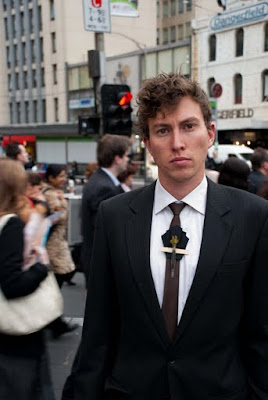 Could you please elaborate on how the project evolved… in your artist talk you mentioned several initial ideas that didn’t make it to the cutting board.

BRITT: As the project developed it moved away from privacy to being more about making a series of wearable items that addressed the senses; sight, smell, hearing, to act as antidotes to city living… smelly streets, crowded streets, noisy traffic etc.

BEN: We came up with a few concepts like a skirt which houses thistles to maintain a space around the wearer. Among other ideas this was eventually ditched because they didn't fit with the other pieces scale wise or were going to be a challenge to fit in the exhibition space. We also started with an idea of using the plants and animals like pets, so they would be cared for at home, taken to work in a wearable accessory and then put in another spot at work. They vials could also be interchangeable.

BRITT: After coffee or beer and sketching sessions, there was a lot of email contact and experimentation with materials. I took on responsibility for sewing…

BEN: …and I took on the veneer and CAD work, as well as a lot of the web and marketing media.
That being said, do you have any future plans for these ideas that weren’t viable for the exhibition in the niches?

BRITT: We're not sure about reviving cast off ideas, but it would be interesting to play with bio-accessories on a larger scale, like for a laneways project. I think there the project could re-incorporate some of the previous aspects like personal space and have a stronger focus on the human/plant symbiotic relationship.
BEN: I think we have focused on the few which make a neat set, but really the idea of designing an accessory for a sense or a city emotion (like the need for privacy), using the materials we have could be extended in a lot of directions – so given the chance we could come up with lots more ideas! However, we would probably like to extend it scale wise as Britt mentioned. We would also be interested in using out knowledge of materials and the methods of manufacture to create other displays with the same theme, either for art direction, experiential or environment design, or even window dressing. 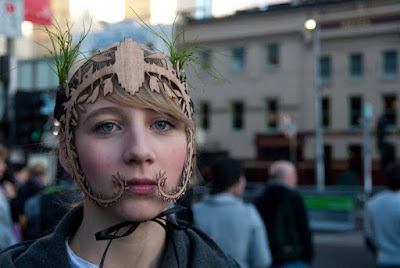 What was the most difficult idea to realise/most complex work to make?

BRITT: Definitely the most difficult would have to be the coronet (pictured above), because the veneer is so delicate. I know Ben had a heck of a time with the veneer, but then it was a matter of attaching it to the sewn bonnet head piece, not putting too much stress on it, but maintaining a curve....there were times I didn't know if it would come together.
BEN: More than that, Britt, I pulled half my hair out going through repetitive processes with the veneer, never finding a solution! So the material was the most challenging thing for me, rather than an accessory specifically. The coronet is by far the most fragile and we have pushed the material to its limits.
BRITT: Personally I found sewing the five stranded band for the perch the most testing. I ended up one night sitting in bed hand trying to meticulously hand sew a satin ribbon lining on the inside on the bands, after about five hours straight I gave up and finished up sleeping on my hand in an attempt to flatten out the claw that had developed.
BEN: I had a mini veneer factory going on my bedroom floor with different stages of glued, oiled, curing, flattened and drying veneer. I think we need a proper studio!


Do you each have a favourite work in BIO-ACCESSORIES?

BRITT: While I absolutely adore Eric (the canary, pictured below) and the lichen covered he's perched atop of, I'm rather fond of the brooches and tie pins. They're small and mobile and I like the varieties of the succulents.
BEN: I really like where the coronet has ended up, and am happy with the fact that it’s quite a different piece to what we started out with. I think the grill is also wonderfully striking, and actually works! 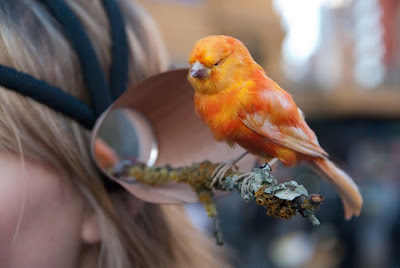 Speaking of Eric the canary…

BRITT: Ben bought Eric on eBay from South Australia. The first time i saw him was really exciting. I expected Eric to smell like mothballs or chemicals but strangely enough he smells like bird, just like Captain Beaky, my family's pet budgie. As for being named Eric? I can't actually remember, maybe Ben got sick of me calling him Monsieur Canary… although he does share the same name as one of my supervisors at work, which in the beginning caused me a little bit of confusion, every time Ben would talk about Eric, I’d double take thinking he was talking about my boss.
BEN: I can’t remember why he ended up as Eric, but I felt he needed a name, as he is an integral part of the team. It was funny when he arrived because the taxidermist actually packed him in a (computer) mouse box, which must have confused him no end.
Since working on Bio-Accessories, you’ve received an enormous amount of attention from the internet which is just astounding. How have things changed for the both of you in relation to this attention, and likewise, your approach on working together and your personal outlook on your artistic practice?

BEN: When we were developing ideas, we talked to Liam Fennessy, one of our old lecturers at RMIT about the project. He gave us some sage advice about positioning our ideas somewhere between art and design, in a conceptual design realm, but still remaining in the craft context. This meant we had to think about our ideas and approach really carefully as we were doing it, and also make sure our workmanship/womanship was up to scratch to fit in with Craft.
BRITT: I have realised how important it is to prototype quickly and keep record of work you have done, even if that's just a photographic record.
I didn't expect for our project to get so much attention like it has on the internet. After being on Treehugger and Design Boom, it just took off in being re-blogged or images making the rounds on Tumblr. It's been interesting to see how particularly the grill and the perch have become conversational pieces with some emphatic responses by online readers/viewers and also when people are skimming over an article or just looking a an image how design with humour, the 'sense of humour' is often over looked or scoffed at.
BEN: I think Britt has a great point about documenting, and also the viral nature of the internet. In the end, people passed it on to each other, or re-blogged the information, rather than it all coming from us. Our talk with Liam meant we had posted our ideas on the internet, but when just pictures are re-blogged they were out of our control and have been taken out of context.


What are the both of you working on next?

BRITT: I'm currently working on another exhibition New Holland, veni vidi vici with Katie Jacobs and Rohani Jacobs. It opens in October, so I’m flat chat sewing a series of Australian fauna as various Christmas feast dishes. At the moment my desk is covered with bits of felt I’ve made, a half sewn life-size black swan and hundreds of Bogong moths. Lots of fun.

BEN: I'm designing furniture for Signal, the new City of Melbourne venue; producing and designing a contemporary dance piece; working with design research group Urban Interior on their coming exhibitions and documentation; designing a puppet show for Fringe; helping to program a media arts festival in November and thinking about studying overseas in September next year. I would like to work more on exhibitions, art direction, photography and speculative/experimental design. 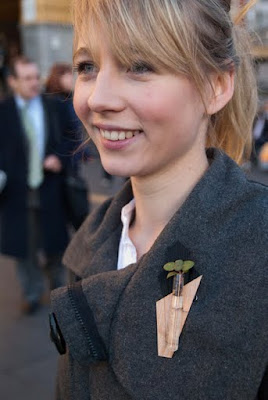