A Field Guide To Hyperbolic Space 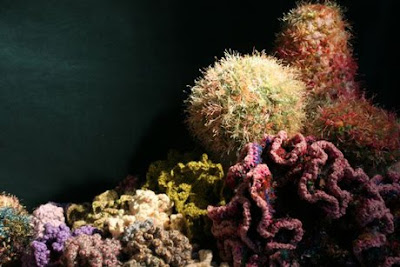 "Crochet Coral and Anemone Garden" with sea slug by Marianne Midelburg.Photos © The IFF by Alyssa Gorelick.

Friends of mine recently put an exhibition on of a crocheted coral reef in the Sydney powerhouse museum. Its a project originated by two Australian Sisters living in the US, Margaret and Christine Wertheim. Their coral forms were based on the technique of hyperbolic crochet discovered by mathematician Dr. Daina Taimina. These hyperbolic forms are present everywhere in nature including in reef organisms but were difficult to model until Taimina hit upon the idea of using crochet.
"Each crochet model results from the application of an iterative recipe. Like fractals, such as the Mandelbrot Set, these forms come into being through the process of doing a small set of steps again and again and again. Though experience often serves as a guide, there is no way to know in advance what a specific algorithm will produce and we have many times been surprised when seemingly insignificant changes in the underlying pattern led to fundamentally new results. In a very real sense, this is a kind of experimental mathematics and we invite crocheters everywhere to explore for themselves the possibilities inherent in these techniques."
From The Institute for Figuring (IFF) website.
The Institute for Figuring which is the organisation formed by the sisters has a site with crochet instructions, pictures and maths you can also see one of the reef's creators talking at this year's TED conference here. 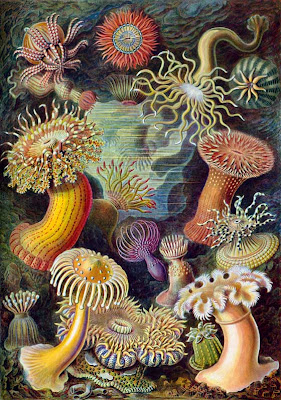 Further investigations would require a look at the work of Ernst Haekel turn of the century biologist and illustrator.
From Craft Victoria