A two-way with Mr Gray

For today, here's an excerpt of a super-special interview between Nathan and CV's Kim Brockett that was conducted (for the first time) via Skype. Ah technology, bringing everyone closer together without the awkwardness of real-life interaction...

I know interviews are traditionally posted on Fridays, but hey, let's walk on the wild side and post it on Tuesday instead. 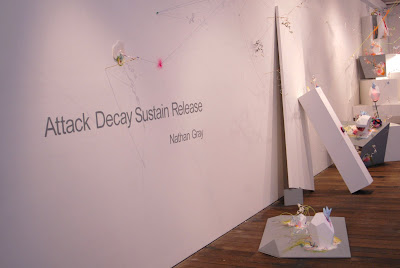 Your current exhibition spans across all three galleries. Did approaching this large amount of space provide any challenges? Or did you have a clear idea of it from the start about how you wanted your work to progress?
I think I find limitations harder to deal with than large spaces! But it did provide me with a unique opportunity to put on essentially three different but linked exhibits. And no, I rarely have a clear idea of what I am doing – I listen to my materials, do lots of experiments and try to think about what sort of music the piece or pieces will make. When I finally come to the installation process, I still leave a portion completely unplanned as you can never account for everything and you want to make the thing feel alive.
And in this case which was the unplanned portion?
Hmm, well I knew I would knock down heap of plinths and deck the halls with a whole load of string but not precisely how. I also always make more things than I need so there’s no risk of having to cut something and being left with an uncomfortable space. 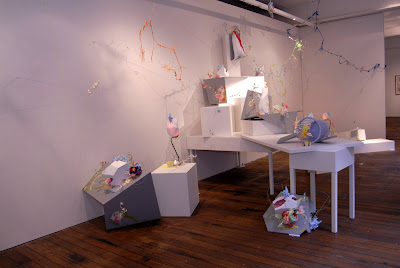 Were there any ideas you had prior to installation that didn't quite work out in the end?
Sure there were. I thought it might be nice to historically contextualize the space, but that fell by the way side. I also wanted to continue the installation out into the street somehow but that was too hard. These ideas are both going to be incorporated into my next work, at Gertrude Contemporary Art Space’s (GCAS) studio artists show.
Oh yeah, both ideas would have been nice.
Sure, but now it seems to make more sense to me, as my wish for GCAS is to have it linked to its community and history, which is somewhat hidden. In terms of indigenous activism the area used to be on par with Redfern for example, but that part of its history is not immediately obvious. I think it feels a little divorced from the community in the neighbourhood, for example the Atherton Gardens flats. 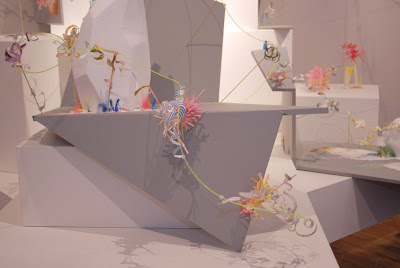 Starting with such a large-scale installation in gallery one, progressing to a 2D/soundscape in gallery two, and finishing with a comparatively minimal sculpture in gallery three, what sort of experience are you hoping to create for the visitor?
I don’t know about my intentions, but it kind of reads like a whittling away. Each piece is based on the same ideas and intentions and these intentions become reduced down to bare essentials over the course of the rooms.
How did you go about creating the sound in gallery two?
Well I just used a tone on my synthesizer a bass tone which when played goes slowly through a system of effects to create the mids and then the treble. I wanted to make something that effervesced – something that progressed from being very concrete and solid that dissolved upwards. This was the basic compositional idea for the installation, drawings and sculpture in gallery three too. I also wanted each piece to be made up of episodes, a return to a starting point in which the same set of elements had the opportunity to develop in different ways. 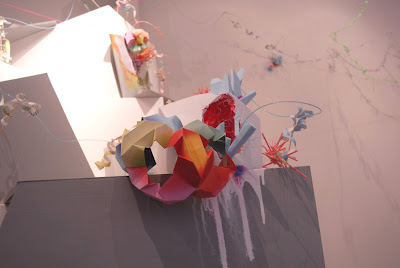 And this is your reflection upon musique concrète I imagine! How did you discover it?
I discovered it from smarter, older people than me, who thought I would appreciate it because I was making music using a very similar process. And to clear up a small misunderstanding, musique concrète is music originally made on tape recorders which uses real world sounds to make music. So it’s early sample-based music but of course more avant-garde sounding. I thought this magpie attitude to music making and collecting and structuring objects in space all seemed to tie together. This show however is based more on synthesis, so it is based much less on found objects and more on created or synthesized objects, not musique concrète. I was actually listening to a lot of Cluster, Brian Eno and (German electronic music composer) Klaus Schulze – anything made on a synthesizer as I had just got one and was falling in love with it. I was also listening to lots of dubstep which at its best seems to me a very tonal, nuanced form of dance music with the beat stripped back and this lush synthesizer middle.

That's a really interesting description, ‘magpie attitude’. You are kind of like a magpie!
I guess the phrase is magpie but the bowerbird does it best. Recently I went to the mountains and saw some lyrebirds, which is like a sonic bowerbird. It imitates everything it hears and then fires it back in these virtuoso performances that go from wind in the trees, to every bird in the forest, to cows and even chainsaws. It was very educational, very musique concrète.

The world is amazing.
Yes it is. 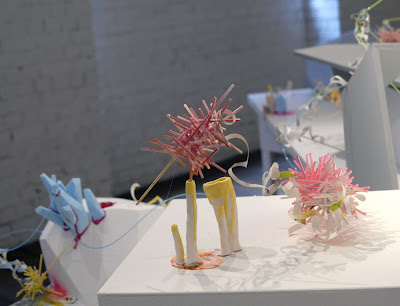 So leading on from that, colour has also always played a defining role in your work.
Yeah it's hyper colourful. I feel like that’s a way of avoiding colour decisions really, by just cranking up the saturation and using every colour. It also makes the work seem unfamiliar, as a lot of my palette doesn’t exist in nature and only very recently existed in paints. I like the idea of cutting people a bit adrift and using devices which force them to interpret the work in personal ways. We are expert pattern recognisers as a species and will recognise actual objects in the most abstract things, especially people. All you need is two dots and a line and it's a face, it’s hard to see it as anything else.
That’s very true... :)
That’s why I’m increasingly drawn to abstraction, but people seem to interpret these layered abstractions as miniature landscapes, almost always.
And by abstraction, do you mean consequently making it challenging to recognise patterns? Would the ideal situation be something along the lines of creating something totally unrecognisable?
Yeah exactly. It’s also because music is itself very abstract and Wassily Kandinsky and many others compared their work to music. It has no specific reference to the world. For me I like not to have fixed meaning to my work and to leave it open-ended. 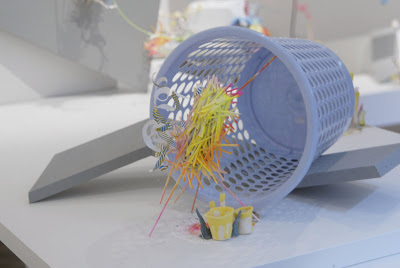 So with the music in gallery two it’s impossible to recognise that it has come from recordings you took in the gallery – success!
Yes. I wanted to conceptually link it back to the space. Like the way a piece of art needs to be exhibited and all the things around it taken into account. Music sounds very different in different spaces.
I imagine the ambiguity would be really difficult for some to understand, especially since these days we want almost everything, information included, immediately and instantly.
I know! And the point is really to be egalitarian. Like you don’t need to be educated in art or anything at all to appreciate it. However I do understand that people are not used to being given the reigns of meaning. We are most literate in advertising as visual culture and there is a lot invested in it being read in only one way. I think this is the strength of art. You know you will have to rely on yourself to some degree when you look at art and with my work it’s a lot. With others you might have to research, but mine you must explore. Though I do spend a lot of thought about how I DON'T want my work to be interpreted so it’s not completely open. Even when I use found objects the abstraction is in their relationships and I want to achieve a state where objects are re-evaluated. 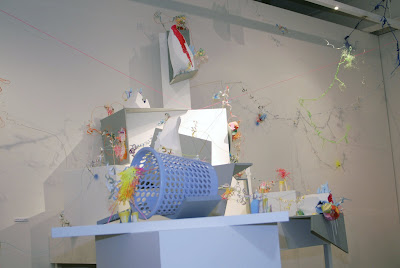 Your combination of colour and music calls to mind synesthesia... you mentioned Kandinsky, who was a synesthete.
Kandinsky was a synaesthete? I knew Olivier Messiaen was but I suspect that that he was faking. Yes perhaps it looks synesthetic. But I am not trying to create interpretations of the sound, rather looking at the way similar compositional practices play out in different media.
Apparently Kandinsky was! I Bing-ed it and it told me so.
Ah BING!
From Craft Victoria