First round of exhibitions for 2010 open next Thursday, 21 Jan 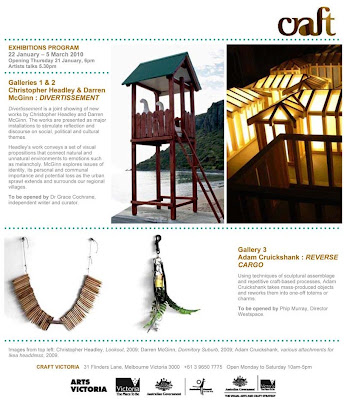 Opening next Thursday 21 January at 6pm are our first round of exhibitions for 2010. To start in Galleries 1 & 2 we have a collaboration between Christopher Headley & Darren McGinn entitled Divertissement. Featuring new work by Chris and Darren, the exhibition is an exploration into the politics of cultural identity through a range of techniques including installation and ceramics. 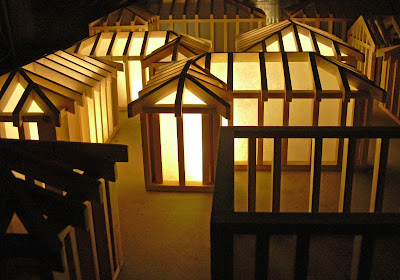 Tucked around the corner in Gallery 3 is Reverse Cargo by Adam Cruickshank, whom some of you may recognise as one half of Sleep Club (the other half being his partner Dell Stewart), among other many, many fantastic things too numerous to list. For his exhibition, Adam presents a contemporary reinterpretation of cargo cults via Swedish homewares giant IKEA, imbuing the mass produced with the magical to create one-off totems and charms.

So you're at the opening, you've already asked them about their summer, had a mutual whinge over the recent 43degree day and come to agreement that the weather is much more pleasant now. What next you say? Here are some handy bits of info to keep the conversation going...

Divertissement (noun):
1. A short performance, typically a ballet, that is presented as an interlude in an opera or play
2. Music (see divertimento)
3. A diversion; an amusement

Cargo cult:
Not 30 year old Slovakian Allan Vilhan a.k.a Cargo Cult who was bass guitarist in rock band Stirba (1982-1992), but a type of religious practice that appeared in certain tribes after being exposed to interaction with technologically advanced cultures. Click here for more info on Wikipedia.

Fact!
In an attempt to attract further deliveries of goods, followers of [cargo] cults engaged in ritualistic practices such as building crude imitation landing strips, aircraft and radio equipment, and mimicking the behaviour that they had observed of the military personnel operating them.
(from Wikipedia)
So there you go, you're all set for Chris Headley & Darren McGinn Divertissment and Adam Cruickshank Reverse Cargo which opens on Thursday 21 January from 6-8pm. Artist talks commence at 5.30pm. Write it down in your calendar and we'll see you next week!
From Craft Victoria