If you've walked by Craft Victoria recently, you've probably noticed a riot of colour in our enCOUNTER The Arcadia Project window space. is an installation created by Sydney-based artist Sean Rafferty. Originally exhibited in Sydney, we're very excited to have Sean recreate this wonderful installation for us in conjunction with the Melbourne Food & Wine Festival

The Arcadia Project is on display until 2 April. 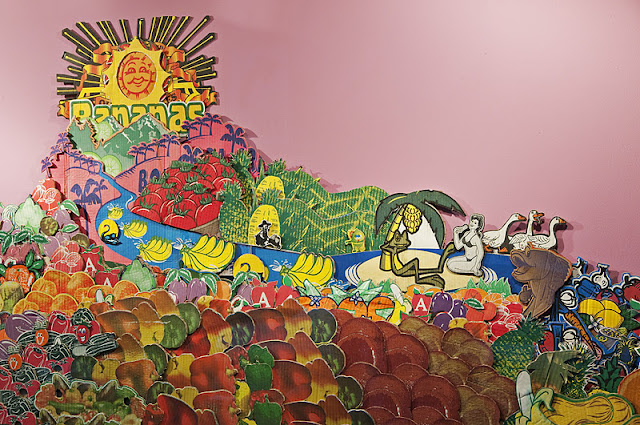 Using produce packaging for The Arcadia Project is so inspired! How long did it take you to gather the hundreds of boxes?
The collecting started about 12 months prior to the first showing of the installation in April 2010. Once a week I would cycle around to the shops of Harris Farm Markets (a family owned group of fruit shops all over Sydney) who helped me in various ways to collect the materials I needed. So once a week I would collect these boxes and go through and cut out the fruit, vegetables, or characters on the boxes with a scalpel. 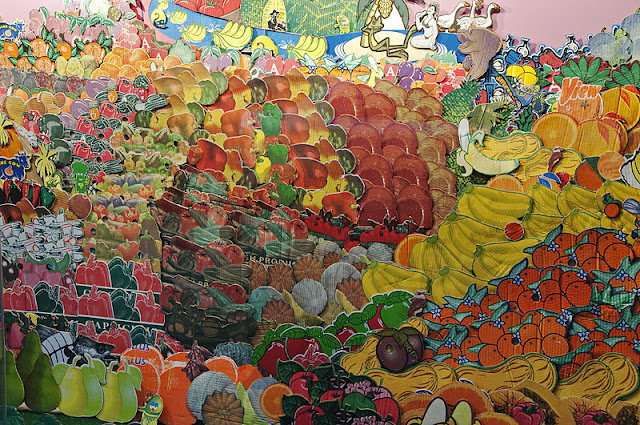 On the subject of material, we imagine you must be quite the expert on Australian produce packaging. What were some of the more interesting boxes that you collected?
Yeah there are some pretty funny designs. I generally thought the more interesting ones were from further north - the closer you get to the equator the more troppo things get and fruit packaging is certainly no exception to this. "Grumpy Tomatoes" were one of my favourites (an angry looking tomato with a hugely furrowed brow), and "Western Mangoes", (a mango that looked remarkably like Malcolm Turnbull, wearing a ten-gallon hat and a gun holster - pictured below). 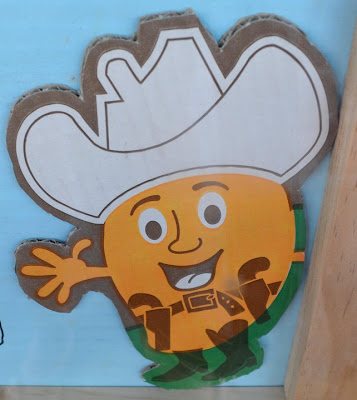 Is your interest with the Australian(?) landscape a recurring theme in your practice (or should it be more accurately described as your interest in the concept of ‘utopia’?), or is it something that has arisen recently? What first drew you to this subject?
The Landscape is definitely a recurring theme in my practice - mainly but not limited to the Australian Landscape. I'm interested in how we represent it, in the context of Painting, Film and Industry. The fruit and vegetable industry have a funny way of imaging and imagining the landscape on their packaging. I guess part of the desire to do this work was to bring a lot of these representations of fruit and vegetables together and to see if it could convey the irony of the 'wildness' of a 'cultivated' landscape. The colour is heavily saturated and the whole thing looks sugar-injected, or fructose injected, and perhaps this says something about these regions of agriculture, and something of the understanding of this landscape. 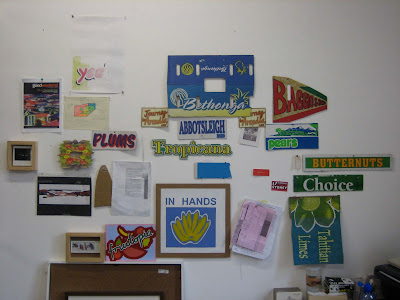 In 2006 you spent some time in Paris on a residency and for The Arcadia Project you cite Walter Benjamin’s ‘The Arcades Project’ as a reference. Though Benjamin’s text was written in the early 20th century, very nearly almost a century before your residency, how did both his text and your experience in Paris inform The Arcadia Project?
I was interested in notions of the 'Flaneur' as developed by Baudelaire, and I came about Benjamin's fragmentary approach to describing the city. It does fit nicely with the work's name, but the reference is more than just a title device. Benjamin's great unfinished work was about the experience of the city from the observer on foot in the Arcades - looking through shop windows, and using this retail environment as a prism through which to look at experiences of the city and modernity. I'm using the shop window as a way to look at the landscape. He assembles a collection fragments to assemble a whole (or at least that's what is thought - we'll never really know). I guess I'm trying to do something similar - it's just infinitely cruder and fruitier.

What’s the next exhibition/project that you’re working towards this year?
I'm part of a group show at Artspace in Sydney called Talking Pictures, curated by Melanie Oliver. It opens on the 22 April and runs to the 25 May. I'm doing a small cinematic construction with a 35mm projector. The work is about Road Films, and moving but not going anywhere.

What would your dream collaboration entail?
Hmm. Probably to to work with Tacita Dean on a film project.

And finally, are there any ‘easter eggs’ we should be looking for in The Arcadia Project?
Well, look for the Memento Mori on/in the landscape. It's very hard to find but a clue is that you'll get it if you are looking from more of a distance. 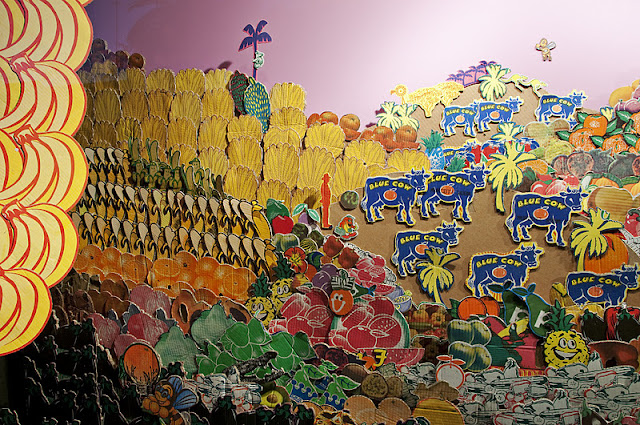