Here's an excerpt from the opening address, by Kevin Murray, director Craft Victoria:


If we look closely at David's work, we see the most entrancing textures. David is a foremost exponent of the skill of neriage, a process allied to makume gane in metal, marbling in paper and milleflore in glass. Like organ transplant in surgery, this is an extremely exacting skill with a high failure rate, requiring precise knowledge of the clay and fire. The results are quite astounding. Sometimes they resemble a woven pattern, like a houndstooth textile. Other times what you see is more mineral-like, evoking the striations found in stones such as quartz. Sometimes you see a woodgrain, other times an expanded thumbprint. David explores and celebrates the mysterious realm of texture, located somewhere between the second and third dimensions.

And then we turn to Petrus Spronk's work, we see a similar richness of visual association. For Sponk, the techniques are just as intricate a combination of techniques, including smoking, burnishing, breaking, reassembling, gold leaf repair, and fine calligraphy. The result is an evocative haiku. For instance, you'll find #17 down the back, which complements the verse:

The vessel complements this verse in a simple elemental form, adding smoked and unsmoked clays to reflect the juxtaposition of water and earth. Spronk has developed his own Esperanto of clay, drawing on the finest traditions from across the work, from Korea to North American Indian, and given us powerful containers for contemplation of nature.

We see with Pottinger and Spronk a sense of the range of expression that a true understanding of materials enables. I must say, there's an uncanny parallel here with the pairing of Andrew Wood and Hamish Hill working in wood at Craft Victoria gallery.

For Pottinger, there is an expression of the inner space of the clay. The folding and rolling of clay is hard to control. Most of the action is early on in layering colours. The expression is difficult to control. While for Spronk, the action is more on the surface. Control comes at the latter stages in the very precise graphic strokes and thorough burnishing.

This range of approaches, from the expressionist to the classical, shows how rich clay can be as a language for giving expression to our world. Such is their precision, and such is there closeness to nature, that it is tempting to think of Pottinger and Spronk as scientists, as much as ceramicists. 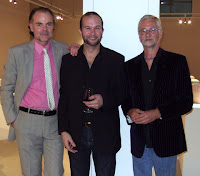 I am reminded of a quote from the great non-ceramicist, Albert Einstein. In 1919 Arthur Stanley Eddington tested his prediction that starlight would be bent by the sun. Fortunately, it proved Einstein correct. On being asked by a student what he would have thought if it had failed, said 'Then I would have been sorry for the dear Lord, for the theory is correct.' Einstein was so gripped by the elegance of general relativity, its combination of simplicity and power, that it would be hard to imagine that nature would not have discovered it first.

And so in some way it is with these works at 101. They are such exquisite objects and so skillfully conceived, that they must express a beauty that lies within nature itself.

Email ThisBlogThis!Share to TwitterShare to FacebookShare to Pinterest
Labels: ceramics