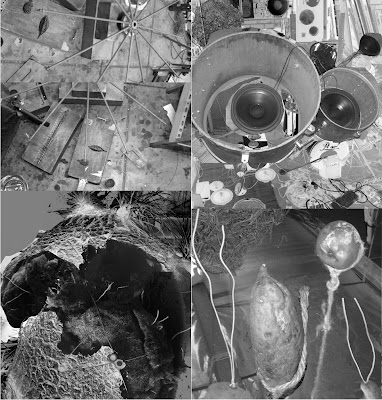 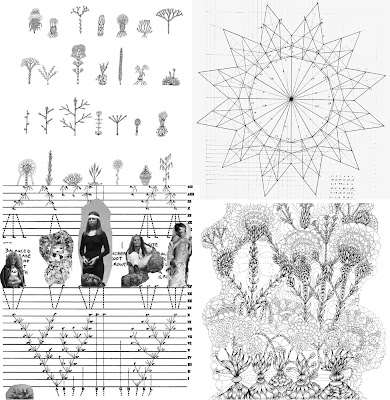 In Dylan Martorell’s shed there’s a portion of decaying fern embedded with small speakers. Audio wires sewn through potatoes dangle from the rafters above piles of found relics and scraps of obsolete technology. We’ve been talking about horticulture and sound, cymatics and cybernetics – of vibrations in the universe and the structures of botanical growth. He shows me a box of gnarly roots, a gourd, a chime, a resonating body and we wonder about the right time to plant snow peas and whether rhizomes grow better in the dark. On the stereo, I listen to his new pieces – visceral, carefully measured threads of frequencies suturing pathways through space, shifting sine tones over time.

All of these most recent scores have been adapted from the growth patterns of plants – of umbels, more specifically – which in the book on garden weeds Martorell’s been reading look like wind-blown umbrellas, their flowers punctuating the ends of upturned stalks like hard, black circles. The text is filled with words and phrases I’ve never encountered like spikelet, achene and ligule: the language of the specialist put to work for the home gardener. In Umbel Ballits, these botanists’ diagrams are used as templates for digital audio compositions. In mapping their forms onto a grid – time attributed down one side, tone values on the other – the leaves, petals and inflorescences appear not simply as notes, but also as metabolai for temporal changes in pitch or resonance. A root becomes a beginning, a seed pod an end: the stalk a continuous drone that supports sonic blooms.

“For this project”, Martorell tells me, “I basically had to teach myself how to read and write music. Sometimes there’s a kind of freedom in having just one or two rules that you are allowed to follow.” But even at first glance this visual music system appears to owe more to Iannis Xenakis’ parabolic inscriptions of bird flights than it does to any standardised formula for notation. I look at the scores again and see them as maps in which the translation from the visual to the sonic and back again is reversible. “It has to be precise”, Martorell says, “you should be able to give each drawing to someone to be read and played.” Hypothetically, listeners might be able to re-inscribe Martorell’s scores, just as their intricate, interlocking geometries can be used as sheet music for future audio performances – a possibility put to the test over the course of the exhibition, as the gallery becomes a rehearsal space for the live performance of the scores.

There is a definite disjunction between the structural precision of this project and the undulating improvisations that have marked Martorell’s past work. Gone is the free form extemporisation that permeated earlier creations: Umbel Ballits initiates and follows rules, adopts a system, sticks to the plan. Only the clusters of sculptures that populate the space are immune to regulation. Fashioned from found objects and living plant material, these kinetic “dioramas” serve as both allegorical representations of the botanical dramas at work throughout the exhibition and as a practical address to technical requirements: connective wires snake around curlicues of roots, audio components resonate in organic fields of decay.

With their odd sense of scale and overtones of experimental science (Martorell also thinks of them as the by-products of lab work) each cluster trades on the science fictional and the marvellous, two qualities that also persist in his ongoing musical ventures. Where these new works differ from his earlier productions, however, is in their clear positioning against a regulatory conceptual infrastructure. In Umbel Ballits, the parameters for creation are embedded in the life patterns of plants, re-activated in each work as a chrono-botanical cartography of audible design. 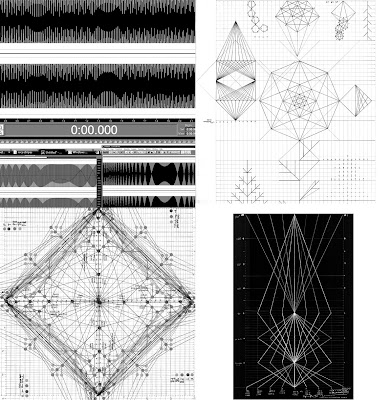 These new scores of Dylan Martorell’s— in which the inflorescences of various angiosperms are used as the basis of geometric designs, then to be translated into music—connect with ideas developed by John Cage on the possibilities of the natural world providing formal bases for art and music. In his own work, Cage gave us ‘nature’ as anarchy, defiant in its denial of humanity; Martorell’s ‘nature’, on the other hand, is scientific, a nature that, in a certain sense, cannot exist as purely natural. Here the formal principles of natural growth are overlayed on the grid, the space of exactitude and definition: ‘nature’ is constructed through its analysis and recording and, despite its oft-stated sublimity, is conceptual, rather than bluntly factual. Although science is at least partially the building block for our understanding of the natural as always-already interpreted, positivistic scientism works hard to objectify its body of knowledge and distance it from the human. Martorell refuses a bifurcation of knowledge into the scientific and the artistic: he makes music from botany, perhaps teaching us something about plant life in the process.
In his diverse practise, which has involved drawing, print-making, assemblage, music and performance, Martorell consistently engages with non-western cultures and cosmologies.
He has drawn mandalas with Nathan Grey, collaborated with an earnestly practising shaman in the Hi God People (a group whose performances often involve an unsettling cohabitation of the ironic and absurd with the authentically cultic and mystical)—these scores link to his previous work in proposing homologies between the forms of nature and music, a holistic approach rather than one in which humanity and nature, or science and art, are posed against one another। ‘Remain faithful to the earth’, Nietzsche wrote: in this show, we see Dylan Martorell experimenting with techniques for doing just this. With this in mind, we might question what we wrote above: it is not that nature cannot exist outside of ‘culture’, but rather that boundaries between the two have been ingeniously collapsed: from the point of Martorell’s formal homologies, the music these scores inspire is as ‘natural’ as the diagrams that inspired them were ‘cultural’. To quote La Monte Young, ‘these sounds are ancestors of the wild sounds – natural sounds, abstract sounds…’ -फ्रांसिस प्लैगने. 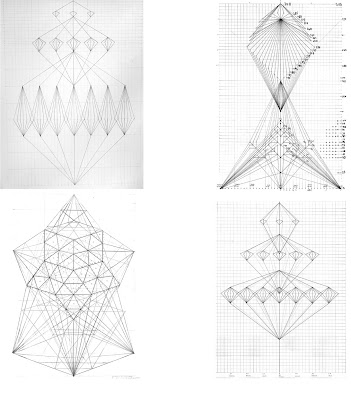 Modes of representation can vary greatly, and can open up the world to new forms, ideas, theories and phenomena that are greater than there inspiration, or at least far removed from the original concept/form that the representation hoped to represent. The form of scores as biological sketches as well as musical composition and abstract art opens many windows. Also their connection to the geodesic and dymaxion Architecture of Buckminster Fuller. Who put the Geometric makeup of the macro and molecular into sensible design. The forms of Dylan's composition have comparison here, and indeed to other representations of the micro and molecular systems of nature.

Buckminster Fuller and others of his ilk have often looked at the geometry of a natural form in a stagnant state when mapping it out into architectural and engineering projects (not to say he and others have not looked at nature as a fluid form), but the rhythm and fluidity of nature is paramount to it's form and are in a sense, it's form. Indeed movement is the form of nature, one of the resonance of this movement is sound, and it is both an aural and visual resonance. I remember being intreegued (big pun) when reading the secret life of plants, by (not sure actually if it's that touched on in the book, but it was defiantly a main trail of thought in my mind) the time scale of plants, this drone existence is one to be envied, it is one that is easier or more experiential for us to fell and explore through sound, and in Dylan's case visual representations of sound. Plants indeed do this through there passionate murmurs and earth rumbling growth spurts. The aural range of plants in a time scale is far superior than of any fauna, including man. Much of sound/music focuses on a linear moving forward, not on the floral branching out and slow growth, it is something to take on in composition and listening to sound, for instance that beats can be decades apart. This being in the case of ye olde trees, or that that fungi (can't remember his/her name) that spreads for miles, could make bleeps of joy suburbs away.

From the cracking of branches to the crystalline growth and symphony of photosynthesis plants also have a anthemic happy hardcore of there time frame, this is hard to hear in real time. if it was amplified and speed up, it would i think take on a jagged posi-techno glacial feeling.

Machines and plants share an alien and robotic identity in our view on them. It is a humanising in a way, but it is also above this, as some higher understanding be it spiritual or post humanist, non animalistic. In that machines take human form , but pose some kind of super threat, like higher beings or aliens. Plants also have been viewed like this, for example day of the triffids, or little shop of horrors. Also there is something that links techno/electronic music to plant life, there is the view of space and time as a similarity of drug use and plant time/space. But aside from the cultural connections, there is also the cycles of electronic music in relation to plants cycles. The sameness of micro chips and root systems, and time expanding relations of repetition in relation to the the time span of much of plant life. This is surely part of the appeal of out door raves/ doofs, being one with nature, with plants.

The dew drops on leaves at a different speed add a poppy dub beat (little pun) . Plants are so a part of culture that they have their points of cringe, be it airy and hippy or through the standardisation of consumable vegetable material. But the exploration of plants is something that is deep and without ends to discover. This can be approached in a clinically scientific way, or more experimentally. both in doses is probably the best way. The sound world of plants is quite an abstract space for exploration.


Dylan's scores as architectural plans would be amazing, a common projection to make on the spacial nature of sound, but very relevant in relation to the technical nature of these drawings, and the possibilities they hold within in the collaboration of man and plant. There is an optimism in this relationship that I find very admirable, and that brings me back to the relation to Buckminster Fuller, and his concept of space ship planet earth (One that Sun Ra brought about the sound effects for). On a micro level that plants occupy and of it's time frame, is a cellular nebulas in virtual cracks within solid earthly form, that creates inward skies, that create geodesic forms in their molecular make up. The fluidity of this in a plants growing process is linearly rhythmic and chaotic like most structures in Nature. but it is the Variety and time span that is so interesting, with trees living hundreds of years (maybe thousands?) it is unfathomable what they would hear, and how they would hear it. But it is nice to think about, maybe only for a second. Which as I write this expands to millions of micro seconds, it is all a point of view anyway, time that is. Stress can make hours drift away into nothing, actually so can be being relaxed. So, maybe there isn't a superior time frame exactly, but the extension of time is not a bad think in my view, and maybe dragging out the end of this piece of writing, be it in the form of inward thinking, or lack of full spot, is a good thing for you? I hope it is. 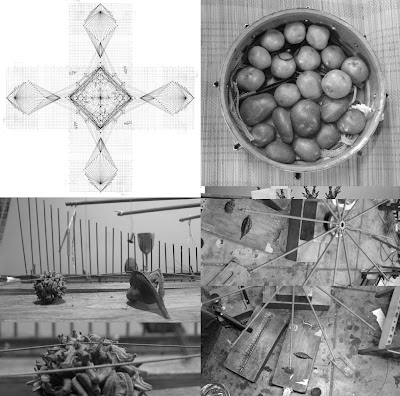 Email ThisBlogThis!Share to TwitterShare to FacebookShare to Pinterest
Labels: exhibitions