This week CLOG sits down with long-time craft enthusiast and COUNTER stockist Vicki Mason to chat a bit about jewellery, plants and extraordinary moments in ordinary days.

'Making jewellery fulfils a need I have to create objects that hold special meanings. These objects can be worn and can potentially provoke in the wearer and viewer a need for a response or interaction of some kind. A dialogue is opened up - jewellery then acts as a tool for the communication of ideas.'
- Vicki

Now based in Melbourne, Vicki was originally from New Zealand. An accomplished craftsperson, Vicki has created work on commission by Absolut Vodka and the 2006 Commonwealth Games and has also been included in several publications including 500 brooches, 500 necklaces and 500 rings.

Vicki is a contemporary jeweller who draws inspiration from nature and its floral offerings and combines it with plastic - a material that she believes is significant and exemplary of her era:

'My work references my interest in botanical motifs. Historically these motifs have a long history within jewellery's imagery so are a rich source for reinterpretation and investigation. I'm also interested in notions of place, belonging and the life cycle. I use plants as metaphors to represent these ideas. These are sourced from native plants from the south (both exotic and indigenous) as well as from family ceramics (Mason's ironstone pottery).

'I have an affinity for plastic and use it for its inherent playful colourfulness, lucidity and formal versatility. Plastic for me is a valid material belonging to this age, my age. It is an accurate documentation of our time, perhaps a replacement for the precious gems of more traditional eras. I choose to combine precious and non-precious materials to test the limit of novel aesthetic concepts.'

Without further ado, read away! 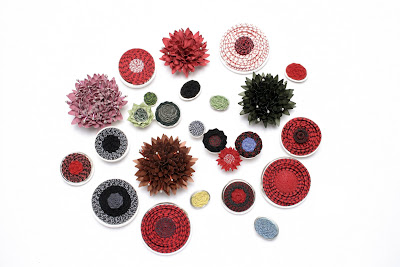 How it all began…
I’m a country girl at heart and I think being raised in New Zealand on a property encompassing a decaying orchard set in motion my love of plants. I also had a mum and two sisters who were mad for anything plant related, so gardens, plants, textiles/jewellery and objects generally that employed these motifs surrounded me. I remember being especially fond of the 1970s flowers designers of the time used on some great plastic wares.

About my whorl series (pictured above),
These works came about during a residency at Manchester Metropolitan University in 2003 as part of an exchange project. They were 3D doodles in plastic initially and a response to some decorative imagery I’d seen in Stoke-on-Trent in the pottery museum there. Sourced from Masons ironstone ceramics they reference the plant motifs employed on various ranges as well as forms derived from Australian native plants.

Essentially they utilise a paper folding process. A long strip of remnant flexible plastic (usually stationery or upholstery) is cut with a deckled edge profile and coiled… it’s a pain when you’ve coiled a very thin plastic and then in a split second moved too quickly and dropped the whole thing….

My proudest moment in my career so far…
Phew… that’s a tough one. Probably learning to let go of the disappointments in a flash and with a smile on my face.

If you weren't a jeweller, what else would you love to be?
A pilot, I’ve got this thing about flying…. I love seeing the world from a different perspective. 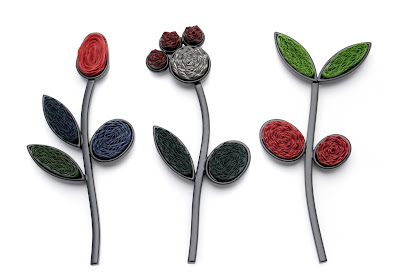 The first thing I do in the morning...
Give my wee girl a hug and a kiss or my husband… this is after pulling myself vertical… then it’s coffee time.

...and the last thing before bed,
Give my pussy cat a big squishy cuddle and put her out, she’s a door scratcher with a tendency to scratch at 3am for a bit of a, “hello, I’m here” reminder.

And finally, the one thing I can't live without is…
Tea. 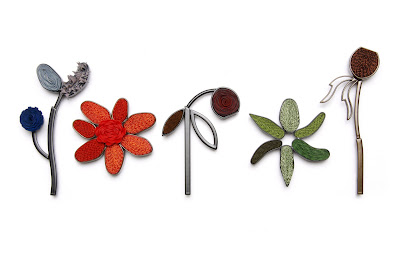