Fresh from their recent collaborative exhibition in Gallery 3 and enCOUNTER are Dylan Martorell and Sunday Morning Designs (Lichen Kemp and Jitske Wiersma). Over the past few weeks, Dylan and SMD transformed the two spaces into an ambient space featuring a teepee shelter crafted from repurposed shopping bags and a variety of plants and mushrooms.

Their exhibition came down just last week, and so it is with great pleasure that CLOG presents to you an interview with the artists. 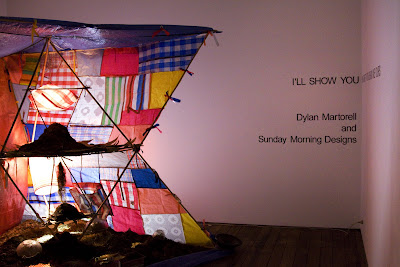 How did the show develop conceptually?
The idea came about very quickly as we were both interested in creating a portable structure. I’ve been creating large scale bamboo installations based on music scores I produced using plant growth patterns as the structural basis. This then developed into an idea I had of creating 3D architecture that replicated the music it was based on, again using bamboo as the skeleton.

Were there any ideas that you considered, but weren’t able to carry out in the end?
Not really. I didn’t think I would have to come in to the gallery as often as I did but I’m glad it worked out that way as the growth was so quick that I didn’t want to miss out on any of the various stages.

What were some of the challenges faced during the collaboration?
One of the challenges was simplifying my design so that it could be covered easily, but apart from that we worked quite separately, with the various stages coming together for the first time during installation.

Growing mushrooms out of season was obviously a challenge, as was keeping the soil moist, harvesting decaying mushrooms at the right time, and also getting the right amount of light for the various stages. The soil-based mushrooms were easy as I knew they would probably appear at the right time, but the wood-based mushrooms had been growing in their various stages for two months before the show and I really wasn’t sure if they would appear or not, so the fact that they fruited two days into the show was a really great moment. The pieces in the window were problematic as the conditions weren’t great for mushroom propagation so that’s a lesson learned.

Dylan, plants are something that have been heavily featured in your work of late. What draws you towards using plants?
I’ve always been attracted to plants as the one of the visual building blocks of my visual- and sound-based art, but recently it struck me that rather than trying to mimic nature it would be a lot more exciting and rewarding than actually working with nature.

I’m not really interested in creating finished works of art at the moment; I’m more interested in systems of growth or decay, where you work alongside the artwork and become a caretaker rather than the author. So working with plants is perfect, specifically edible plants that can be used structurally or that grow quickly, which is why I pursued mushroom cultivation for this show.

Originally, I wanted to create a series of mould-based watercolours but this proved problematic so I decided that the sculptural potential of fungi was a great second option.

You’ve described the garden as a ‘sonic garden’, could you please elaborate upon the exhibition’s accompanying soundtrack?
The music in Gallery 3 is a soundtrack for growing mushrooms. It’s a small edit from a piece that goes for about an hour. You can find the full recording here.

In the past, the sound of my installations has been tied in a lot closer to the physical materials I’ve used. But for this show, the piece is based on the idea of three stages of growth mimicking the process of mushroom cultivation: from spore to inoculation of wood/soil to fruiting - three different physical representations of the same entity.

The music was created in a similar way. It is one recording of me playing a violin bow on an electric guitar which has then been pitched up one octave, pitched down one octave and then layered so that you have the three different speeds or rates of growth playing concurrently. On the full length piece you can hear another track of music box which is meant to be the sound of fruiting.

And last but not least, what’s happened to the mushrooms since the close of the show?
Well, I got two or three meals out of the Craft Victoria show and they are still going strong in the back of my shed. 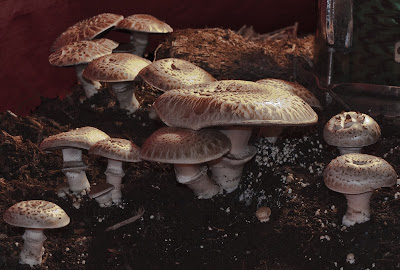 Speaking of I'll Show You My Craft If You Show Me Yours, the next collaboration between John Hall and Ellie Mucke is currently up in Gallery 3 and enCOUNTER, with the artists dropping by on Thursdays. Drop by!
From Craft Victoria