A word from Gracia and Louise 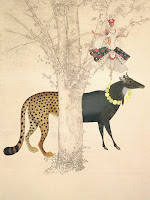 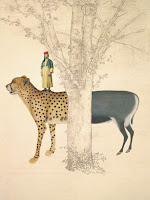 Guidance for those curious,

A key to help make your own world visible is an amalgam of sentiment and prose pulled from the pages of Hermann Hesse’s novel Der Steppenwolf (1927).

Spoken in warm voice by Pablo to Harry: ‘I can throw open to you no picture-gallery but your own soul. All I can give you is the opportunity, the impulse, the key. I help you to make your own world visible. That is all.’ [1]

From such we took impulse and created a series of other worlds that lie hidden, other interior worlds viewed with twin ‘gleam of pain and beauty that comes from things past’.[2]

Often our work, be that created individually or a piece worked on collaboratively, is dotted with fragmented keepsakes, and that is especially true of the work we have created for this exhibition. A sense of nostalgia is never far from frame, but ‘nostalgia is not always about the past; it can be retrospective but also prospective’.[3] It can cast also a sideways glance and be likened to unrequited love: ideal, unreciprocated and satisfying. In so far as memory is concerned, it should not be relied upon.

Nostalgia comes as a word from ‘nostos’—return home, and ‘algia’—longing (or pain). Its roots, in word, are Greek, and it ‘seduces rather than convinces’[4], something which greatly appeals to us both for we like to work in riddles and puzzles, and what could be more puzzling than something as hard to pin into place as seduction?

The inner landscape and the greater literal world, the geography we map charts longing, and fragility is revealed along the way. But be forewarned, it is oft a pathway littered with red herrings. Our keepsakes, these objects gathered, perhaps they are not all they appear at first cursory glance. Perhaps these objects take, as Jean Cocteau once mused, ‘advantage of our habit of believing them to be immobile.’[5]

Shell masks from Manfredo Settala’s (1600–1680) own cabinet of curiosities, a 16th century German automation of Neptune seated upon a tortoise, and an owl in gold, enamel, agate and diamonds made in Dresden before 1718 have been both collected and drawn, and appear now alongside carvings displayed during yam harvest rituals in Papua New Guinea from the Masco Collection of Oceanic Art. Calling to mind a wonder cabinet of curious, they serve to bring together ‘liminal objects (suspended between art and nature, death and life) …investing them with new value, new power, new meaning.’[6] Yes, for you, we have, with brush and watercolour pigment, and scissors and paper as our primary tools, created both collections of curious and other worlds.

As you wander, let the words of the poet Joseph Brodsky guide you: “you cannot step twice on the same asphalt.” [7]


Gracia and Louise's exhibition A key to make your own world visible is in Gallery 2 and is on until Saturday 28 November.
From Craft Victoria