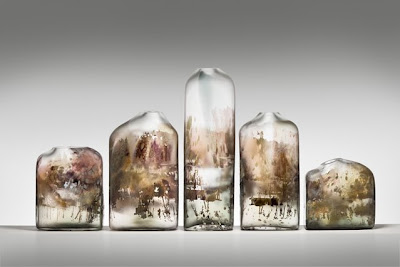 Glass Landscapes: An exploration of nature and glass.

Human interaction with nature has always been a strong theme in my work. I grew up in Perth, Australia a city of extreme isolation where nature is a beautiful, yet harsh reality. The dividing line between the urban and natural landscapes was small and constantly changing. I gained an early respect for and fascination with nature by watching this interaction through windows, which created a transparent division between the controlled and uncontrolled landscapes. Glass has continued to be the way I interpret the dynamic relationship between the two realms: control and randomness, city grids and the Fibonacci sequence, urban planning and natural selection.

As an artist I use glass as an invisible skin to explore form and decoration, creating a body of artwork that explores our historical and ongoing fascination with nature. I am particularly interested in the way early industrial designers assimilated patterns from nature to design and decorate mass-produced objects. It is this interaction and decorative process I would like to explore. I draw from both nature and its industrial interpretation as a source of form and decoration to create a variety of hybrid objects, a synthesis of man and nature. I use historical techniques to create texture on my glass, replicating patterns found in nature in manufactured decorative glass. Through sandblasting, engraving and glue-chipping the outer and inner surfaces of the forms, I highlight the transparent qualities of the glass. As in natural forms such as leaves and trees the double- sided nature contrasts textures and smoothness, referring to circulation within a protective shell.

I tackle this issue with a double vision, so to speak. I take from my observations of nature, to create stylised forms and abstracted patterns. I also draw from my research of nature-inspired decorative motifs predominant to early 19th Century industrial glass and 20th Century Scandinavian design. I then appropriate and re-interpret these equally, to create works that are a representation of landscape, both natural and manmade, using forms that illustrate processes of clearing, construction and resurrection.

My vision – the appropriation of nature, twice observed, and re-interpreted. 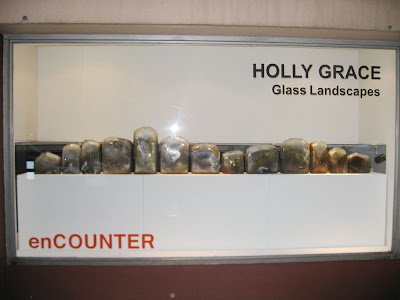 Till 30 November, come on down and have a look at the stunning display of new glass landscape works by Canberra-based artist Holly Grace. It's our last enCOUNTER exhibition before the Christmas juggernaut well and truly takes over CVHQ - and the rest of the world - so come on down, for old times' sake.

Also, keep an eye out for an upcoming Introducing... post on Holly. Something to look forward to! 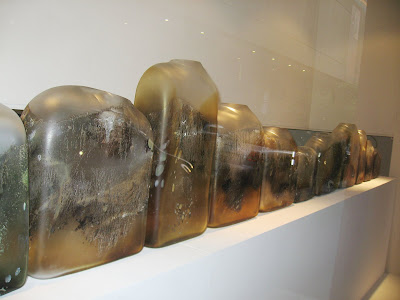