To accompany Antuong Nguyen's current exhibition GEMINI SCORPIO at the City Library niches and projection space, here is a bit of writing by Kim Brockett.

Encountering Antuong Nguyen's new body of work in GEMINI SCORPIO, part of Craft Victoria‟s 2010 Craft Cubed festival, it is difficult to feel anything but curiosity and wonder at his blithe use of colourful common objects. I am reminded of a recent exhibition entitled Casual Object Garden and Other Material Matters presented by Carson Fisk-Vittori and Michael Hunter at Chicago's Roots & Culture Contemporary Art Centre in April this year. Casual Object Garden… is a lovely exhibition title, one that ties together the artists' more intuitive approach to the collection and presentation of everyday objects; an approach that is mirrored in Antuong's work. By adopting a playful and experimental air, Fisk-Vittori and Hunter explore the materiality of the objects used, and in doing so liberate them from their ingrained purposes.

Indeed, what I love most about Casual Object Garden… despite, or perhaps in spite of, having only 'seen' it on a couple of design-orientated blogs, is its title. In particular, it was the first two words 'casual object' that charmed me. For a while now I've been encountering 'simple' lifestyle blogs, magazines, shops, etcetera (but surprisingly no actual lifestyles yet) that promote a 'humble, honest' approach to living. Thus far I have had no means of articulating this situation and describing its particular nuance. The lifestyle in question is one that makes living look easy and simple, and it usually involves subtle aesthetics like slightly rumpled white sheets, natural wooden furniture, a verdant houseplant or three and inevitably, some 'casual objects' to finish the scene. 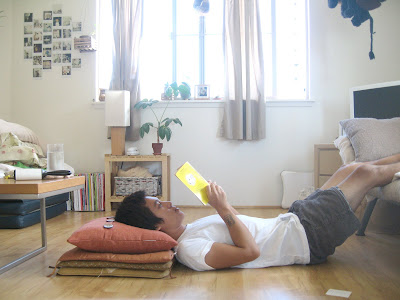 Image credit: You Can Make It Easy

It's always these casual objects that get me every time. I want to own these casual objects, or more accurately their owner's deft approach, and I do try. It's just that it's really difficult to be effortless… even verbalising this desire creates a dilemma as naturally the conundrum is that once you do attempt offhand placements and nonchalant arranging, everything just seems so contrived.

Which is why I am very much enamored by the works in Antuong's show. Here are a series of mostly everyday objects taken out of context and casually arranged into amusing formations through “constructed happenstance”, to borrow a term used to describe Fisk-Vittori and Hunter's exhibition.[1] In GEMINI SCORPIO this is manifested through various absurd formations: a length of fluorescent pink cord rests on a tennis ball; a trio of candy-coloured dish sponges balance on a checkered washcloth; an orthopedic foot pad spills forth from a plastic cup. Each as charming as the next, the six installations in GEMINI SCORPIO are housed in niches and contained within a fixed and constructed space in the bustling City Library, like little Shangri-La's of calm amidst the hustle.

However I don't think Antuong's purpose was to render the objects unfamiliar or to free them from any sort of banal everydayness, but rather to draw your attention towards the infinite nature and possibility of things. It's an optimistic outlook, the kind that makes your heart swell at the fact that so much possibility awaits you in this world. It's also the kind of sentiment that makes you instinctively shudder at the amount of corresponding disappointment that lies ahead… but grown-up reality aside, this is a thrilling optimism that is intrinsic to childhood, the latter being the theme of this year's Craft Cubed festival.

It's only as an adult that we can look back to our childhood and mistily remember things as they used to be, not as they were. As a child everything stretched out beyond us and into an infinite horizon. For me, Antuong's work is optimistic in that it seeks to return to this point in our lives, although to use the word 'return' is to suggest that we have perhaps, and in a way this is true, moved beyond this. We are now in possession of the concept of 'young' whether we are 20, 30, 40 or more. To be privy to the knowledge of what it is to be young implies the somewhat saddening thought that we are now 'old'. No matter what the humble lifestyle blogs and magazines tell us, life isn't that simple nor is it effortless; really, we need more than a few casual objects to get through it all. 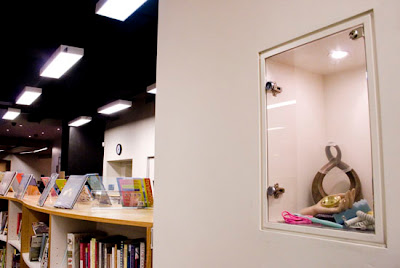 To return to the cheerful idealism of GEMINI SCORPIO, the show hints at the possibility of what is now does not always have to be. In a similar way to how Casual Object Garden… seeks to “re-arrange pre-arrange non-arrangements”, so does GEMINI SCORPIO through its assortment of configurations that highlight the potential of objects.[2] Though the title's pairing of two quite incompatible star signs creates a neat juxtaposition against the poetic synchronicity of the works, the exhibition explores much more than this.[3] Instead it's about thinking, looking and treating things – objects or otherwise – in a non-prescribed way. It's about realising that sometimes working with what you've got might just be the best thing ever.

[1] Karly Wildenhaus, April 2010
[2] Carson Fisk-Vittori & Michael Hunter, April 2010
[3] In fact it's actually a nod towards Antuong's star sign as a Gemini with a Scorpio rising, which apparently makes for an intense personality.


GEMINI SCORPIO is on till 30 August.
From Craft Victoria