Artist talks this Saturday at 2pm! 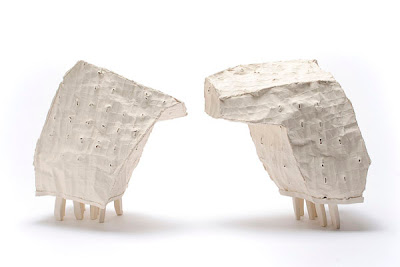 Susan Robey, Inhabit
Inhabit considers issues of architectural space and investigates ways that movement, gesture and character may be represented. Manipulating structural elements such as walls, windows and columns, Robey uses paper thin clay slabs to construct small idiosyncratic architectural forms. The works explore the tension between the inert quality of ‘architecturalness’ and the animation of living beings.

Elfrun Lach, Corollary
Corollary explores the history and ongoing symbolic function of red coral, one of the oldest traditionally used materials in gold and silver-smithing. Despite the rarity of coral, its application within jewellery practice has persisted over time due to a belief in its talismanic qualities. Combining actual and simulated forms of this precious material, the works in Corollary aim to raise questions about ethical supply and usage.

Gerry Wedd, In the Woods
In the Woods takes its cue from the concept of the ‘Australian Gothic’, a construction of the Australian landscape as both a bountiful utopia and a hellish place where nature seems uncannily strange or hostile. Like most figurines, the work sets up a complex relationship between audience and object: on the one hand the viewer is drawn into the interior world of the miniature, on the other they are in control of a scenario where the figurines assume the characteristics of a toy.