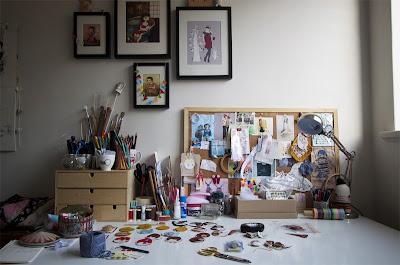 This week meet Evie Barrow of Handmade Romance and currently of the fabulous 'Travelling Circus' display in our enCOUNTER window space! We came across Evie's work quite serendipitously through one of our favourite-st activities, blog-hopping (we wish we could remember which one!). Shortly after we invited her to participate in the bumper Craft Cubed edition of Craft Hatch in August. Not long after that, the shop snapped her up as a stockist and the rest, as they say, is history!

Our second enCOUNTER window exhibition for this year, Handmade Romance and the Travelling Circus features a cast of one-of-a-kind, never-seen-before, hold-on-to-your hat characters like *drumroll please* EGOR THE AMAZING STRONGMAN! BRUCE THE MONKEY!! DOLORES THE BEARDED SHEILA!!! and lots more, but you'll have to pop by to see this magnificent show for yourself....

To coincide with this exhibition, here's a look at Evie's workspace and an insight into what goes on behind the scenes at Handmade Romance... enjoy! 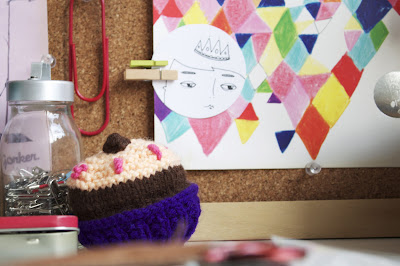 I had joined Melbourne's Brown Owls craft group and felt encouraged to document what I was making, amongst other inspiring and handmade things.

At that point I really had no idea where it would go. In January 2010 I decided to launch an online store and things have just rolled on from there. 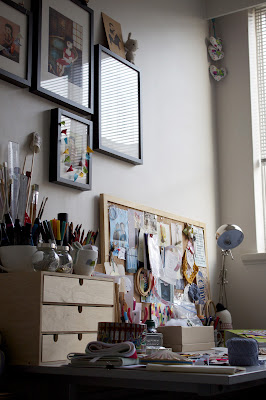 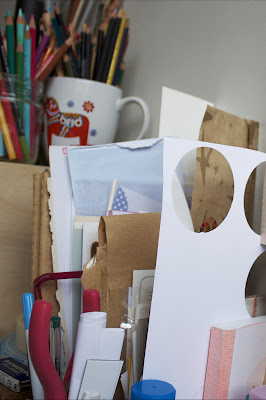 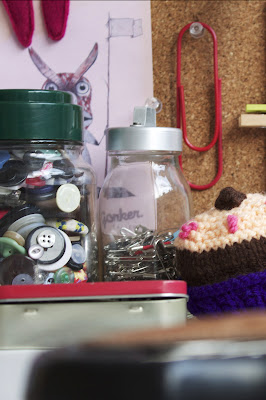 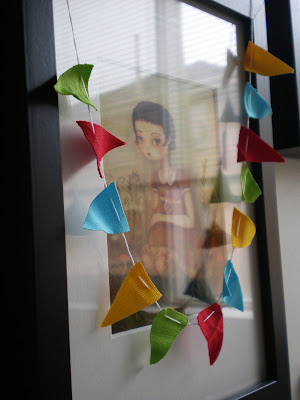 How has Handmade Romance grown since, and what were some essential tools/skills/attitudes that you’ve realised since starting it?
When I opened my online store I didn't know how my work would be received but one thing has lead to another and in just over a year my work has appeared in Frankie magazine and online magazines such as Maeve and Babiekins as well as various blogs.

I've also participated in Craft Hatch, become stocked in 3 beautiful stores around Melbourne and just this month completed a window display for enCOUNTER at Craft Victoria.

None of these things would have happened if I hadn't taken that initial leap of faith. Needless to say, now more than ever I believe if we put something positive which we love doing out into the universe it will come back ten fold.

I also think it's important to remember to enjoy the process as much as the outcome when it comes to crafting and creating. Trust your instincts and do not be afraid to follow your heart. 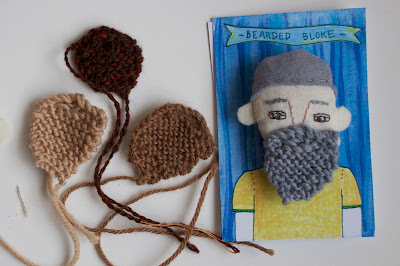 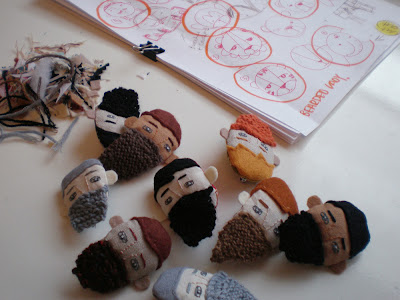 In addition to your (very cool!) full time job as graphic designer at Bloom, how do you balance work with Handmade Romance?
I'm not sure I do. I'd probably have to say, not very well. There are a lot of sleepless nights!
In really busy times it's like I have two full time jobs, so I do my best to remain organised and manage my time efficiently.

Of course this means sacrifices in other areas of life and the intention is alway to try to catch up when things quieten down.

But mostly I feel that balance is a bit of a mystical word in my world right now. 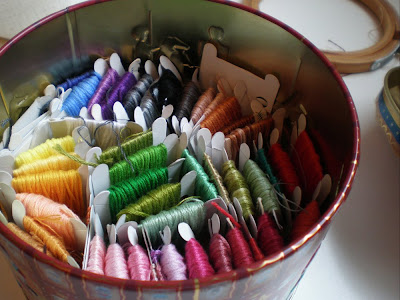 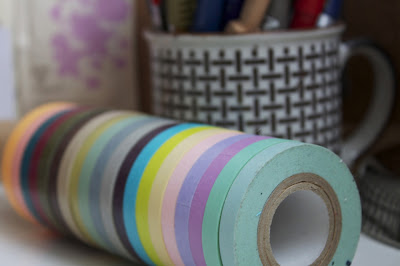 Lots of colourful details in Evie's workspace: beautiful silk threads in a rainbow of colours and the ever popular MT masking tape - cute!

If you could instantly learn a new skill/craft/technique, what would it be and why?
There are so many things I feel inspired to learn and I think if you were to ask me this question each week, I would have a different answer.

However recently I was lucky enough to be gifted the book titled The Making of Fantastic Mr. Fox which is influencing my answer right now.

Every time I look through this book it makes me wish I was able to create stop-motion characters and detailed sets just like the ones in Fantastic Mr. Fox.

I love that the characters and sets have been completely created by hand and have so much character and life as if born from their own world not someone's imagination.

The attention to detail is incredible and I am in awe of the patience and skill it takes to create something like this. 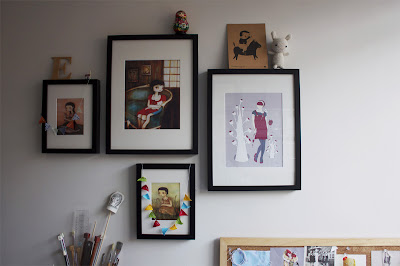 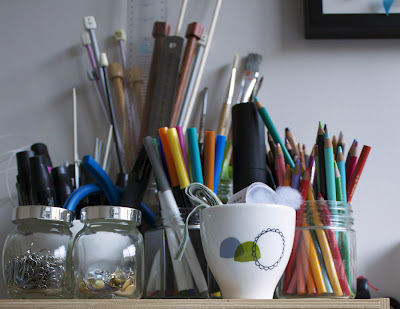 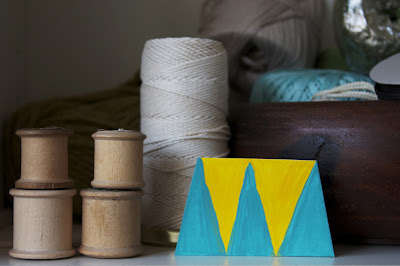 What was your first job?
Something not very creative. I spent time growing up in grape country in Northern Victoria and after school my older brother and I would pick grapes on the family property to save money for things we wanted to buy.

My brother mostly bought Nintendo games and I remember saving for a pair of Doc Martens, after all it was the 90's.

What would your dream collaboration involve?
Since you said 'dream' I would have to say working on character and set designs for a Wes Anderson project like Fantastic Mr. Fox mentioned above.

Or working on a range of characters with Donna Wilson who I also really adore. 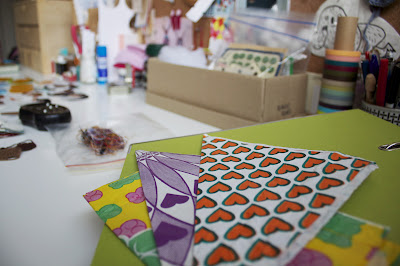 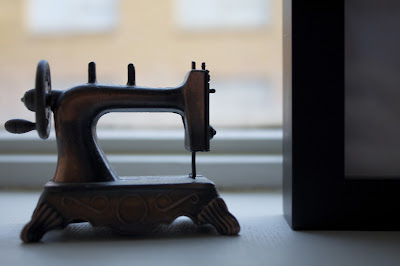 And finally, where do you look for inspiration?
I find inspiration everywhere. I especially love the every day and the ordinary. Observing the simple things. Overheard conversations. Train rides. Supermarkets. Cafes. Walks. Pattern. Colour. Nature. Music.

I find people who are passionate about what they do really inspiring, like those featured in Etsy's Handmade Portrait series.

The many blogs I read are also a constant source of inspiration. I only wish the internet and blogs existed when I was a kid growing up in the country – their ability to connect you with like-minded people it's truly an amazing thing. 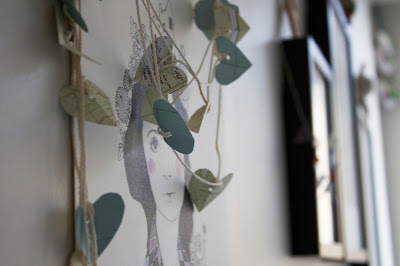 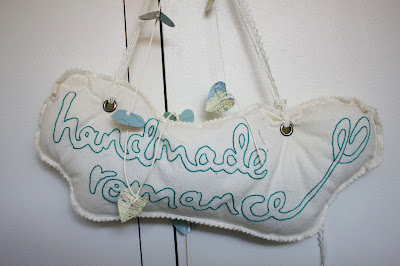 A big thank you to Evie for all of these beautiful images... you've really upped the ante for future studio visits/interviews!

We'll have photos of Evie's window display on the blog next week, keep an eye out for that!

In the meantime, here's a look at some 'in-the-making' sketches: 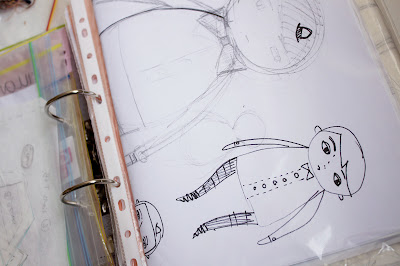 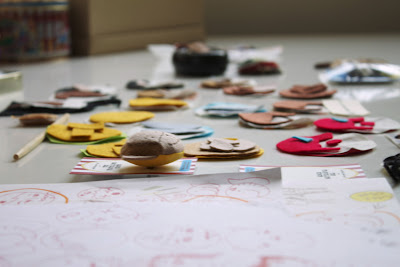 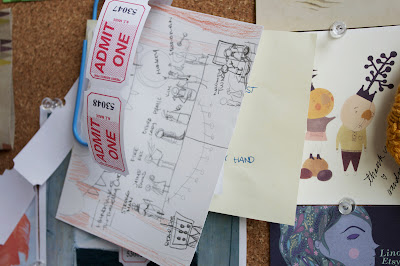 All photographs courtesy of Evie Barrow/Handmade Romance
From Craft Victoria

WOW! That is one lovely and busy looking studio. Congratulations Evie on how far you have come such a short time! Very inspiringx

I absolutely love this little studio visit. So inspiring!

Thanks for this great interview.
Evie's work is amazing, I'm a big fan of her from long ago ♥

I love Evie's studio! It looks so sweet and inviting with lots of little detail. Thanks for the peek.