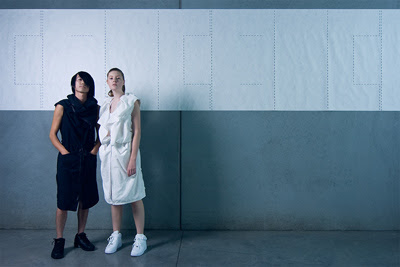 The idea for the envelope started in 1998 after seeing the 1998/9 collection by Issey Miyake. In the collection he collaborated with artist Shigeru Ban to create a collection from recycled paper. The outcome, did not appeal to me, but the process did. Making garments from paper. The garments reminded me of similar ideas in the 1960’s when disposable clothing became a trend as a response to a functional approach to fashion. This is how the idea for the envelope started - with Tyvek a 25% recycled content high density poly ethylene (HDPE) paper.

For me, the best thing that came out of designing the envelope is its accessibility. Anyone can make it. It is just a few straight lines of stitching and folding; and even more excitingly, to get to that point - was more than looking for a way to stitch a few straight lines! It was a battle of the hands and mind.

The envelope was never an end-point, not once in its creation was it intended to be a garment; it was not ever the aim of the design exercise. The envelope happened at a point of rationalisation (or frustration - depending on your viewpoint!).

The aim of the overall project, of which it was a part, was to design a fashionable and functional snowboarding jacket_which was designed later in response to findings from the envelope_the envelope was a turning point in thinking about how the snowboarding jacket could come together as a single pattern piece. So the envelope is a step in the making process and ideation (I don’t want to use the word conceptualisation – too much rhetoric – almost as much as ideation) during the design process! How cool is that! So the envelope is a point of flux in the design process that has been captured and stood still. The standing still is the making of the envelope! Cool, huh!, Anything could have happened at that point and something did. Why that is exciting is because it encourages the idea of design being an engaged process of design; a process that simultaneously uses the hands and the mind. It intervenes the idea of always looking beyond the design and planning phase to the end of the project. I like the idea of design being an inclusive, all pervading, full-body exercise, excluding neither form, function or visual beauty in its execution. I do not like the idea of design as only an ancillary, aesthetic, visually entertaining and superficial exercise.

I think the envelope achieves this first category - as does its snowboarding brother/sister The Square.

Anthea's work features in How You Make It, which opened to the public today.

Hi, A couple of questions to clarify the use of the pattern... I'd love to give this a go! - and get it right!
1. does the fabric need to be 'good both sides'? if not, then which side is the 'right' side when sewing the first cord casing? (I tried to make one actually - I think it ended up inside out... lucky it was very crap fabric!)
2. I assume, from lack of hems and edge finishes, the fabric needs to be a non-fraying type!? What do you suggest???
3. and finally, are the pockets actual functioning pockets? ie on the outside? this confused me!
cheers.

I can't seem to get this link to work - can you please let me know if it has been removed or needs updating.
thanks
Kathreen