"The envelope was called the envelope because initially the idea was to fold up a simple vessel, similar to paper origami, the making of palm leaf toys, weaving and boxes. By folding and refolding, playing with the shape that emerged, cutting away pieces of material and creating a waist the envelope became a thing. The folding of an envelope was particularly inspiring because an envelope is a container in terms of a vessel and a container for communication. Here are just some of the images that were explored at that time – in 2001. " 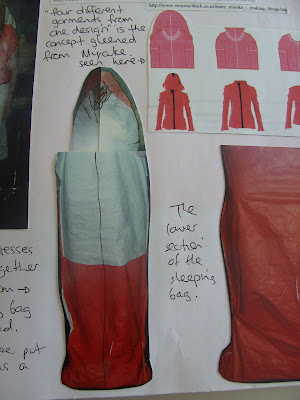 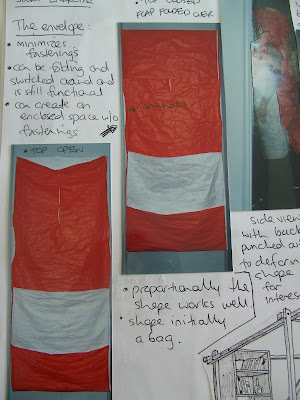 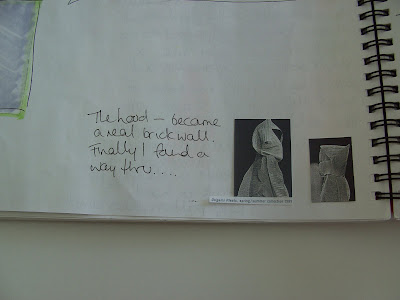 Anthea van Kopplen, participating designer How You Make It
From Craft Victoria

Email ThisBlogThis!Share to TwitterShare to FacebookShare to Pinterest
Labels: envelope

Hello. This post is likeable, and your blog is very interesting, congratulations :-). I will add in my blogroll =). If possible gives a last there on my blog, it is about the Câmera Digital, I hope you enjoy. The address is http://camera-fotografica-digital.blogspot.com. A hug.

Hi.
The thing with this piece is that a lot of the decision making depends on you - the designer - i'll comment as best i can:
1. generally the pattern starts with the right side/face fabric up, place the cord across the middle as shown and fold as shown.
there actually is no inside out, but the piece does rely on a good choice of material based on the composition/texture of the rest of your wardrobe.
2. to finish edges generally two methods:
a. a number 3 machine stitch 5mm from the edge b. bias binding around all edges You can start the pattern with this if you like.
3. yes, the pockets function as does the hood.
there are four pockets in total.
one opening across the armholes
three on the skirt/dress - two at the front to the waist. one at the back, ending at the mid thigh.