A word from Kevin Murray...

You've heard about Emma's exhibition Morphed, and shortly after that about Alana's show Visible Knitting: New Markings, so today CLOG is proud to present a word from The World of Small Things curator Kevin Murray!

Aside from being a past Director here at CVHQ, Kevin is the eloquent and articulate voice behind Craft Unbound, which is something that you definitely have to check it out if you haven't already!

For today's CLOG post, Kevin has written up a wonderful piece on his exhibition which is currently residing in Gallery 1. The World of Small Things is on for 2 more weeks until Saturday 25 July, so be sure to catch it before it ends!

We do have more photos of the exhibition on the blog, and to view them please click here. 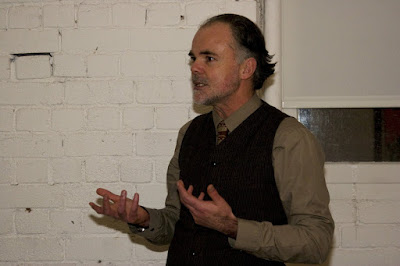 An exhibition is always ends up being more than some beautiful objects sitting on plinths. It's also a conversation about the broader context in which those works sit. In the case of the World of Small Things, this conversation has been about how to best work with artisans from less well-off countries, both to alleviate poverty and to introduce fresh new creative energies into urban cultures like our own.

Part of this conversation is conducted in the 'After the Missionaries' issue of Artlink, which follows a number of artists as they seek to work with communities on the other half of the world. One of the highlights for me has been Connie Zheng's launch of the magazine at Craft Victoria, where she spoke about the misunderstandings between Chinese and 'foreign devils' like us - she should be working for Rio Tinto right now!

But one of the constant frustrations is language. We have certain terms for talking about the two worlds. There's the 'developed' and 'developing', the 'first' and 'third worlds'. I tend to prefer Global South and Global North, as it's less evaluative but the geography is dubious. According to the World Bank, you should say Higher-Income and Lesser-Income countries. Producers and consumers? It's a continuing challenge and I welcome suggestions for better terminology.

The forum about craft practice 'across the great divide' was wonderful. There was such a wealth of experience in the people who came to share their views and experiences. It's surprising to see the number of people already working in this area, as well as new retail stores opening that will stock the work produced. It seemed such as shame to stop this conversation that we've started a group 'Craft without Borders', which can be found at http://www.crafttalk.ning.com/. It's just starting out, so you are welcome to drop in and see if you'd like to contribute.

The area of world craft has trouble fitting into existing structures. It is certainly an abiding concern in many makers - from pilgrims who visit sites of traditional craft to entrepeneurs seeking to create an ethical product. Like other craft, it is committed to the handmade, but its sphere of interests is quite broad. It's not for everyone, but it seems an important source of engagement between the two worlds (see above for appropriate terminology).

I always admire artists who go off the beaten track. It involves great risk, but it seems to have been the driving force of change in craft. Where would Australian ceramics be today without the few who had gone off to Japan in the 20th century. Where would Australian jewellery be today without those who blazed the trail to Germany. Perhaps World of Small Things is a glimpse of our craft future?
One of the pleasing elements in the South Project was to see opportunities for local artists to establish new craft conversations. Craft seems much more conducive to equal exchange than fields like architecture or even visual art, where there is clear Western dominance. That's why to assist this exchange that the World Craft Council are working on a Code of Practice for Craft-Design Collaborations.
You'll notice one glaring omission in the exhibition - there is nothing from Latin America. There is actually a sequel called El Mundo de las Cositas (Spanish translation of 'world of small things'). This is because the 'cosita' is a very special source of craft across the Pacific, associated particularly with carnival and street culture. The idea of the Latin sequel is to include something that is a little more playful, though with serious politics underneath.

I'm heading off to Chile at the end of the month to visit some studios, including the amazing horse-hair weaving. This time I hope that there will opportunity for some workshops so that we can all think about the kind of 'cositas' that might enchant our world.