This week CLOG is proud to feature current Gallery 3 exhibitor Alana Clifton-Cunningham, knitter extraordinaire. Based in Sydney where she lectures in Fashion at the University of Technology, Sydney, Alana's artistic practice is an exploration of contemporary knitting, in particular the idea of how knitting is able to deconstruct notions of traditional knitting patterns for the body.
Alana's work is a fantastic display of not only the tactile nature of knitwear, but its sculptural ability as well. Wool is puckered and tightened to create manipulate the surface of the garment, creating a wonderful 3D effect that invites you to touch (well some of them anyway, the other garments are hands off!)
Without further ado, presenting Alana Clifton-Cunningham.
Happy Friday everyone, and see you tomorrow at Craft Hatch at the City Library! 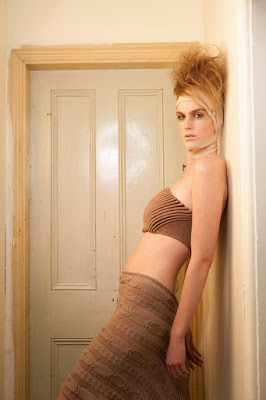 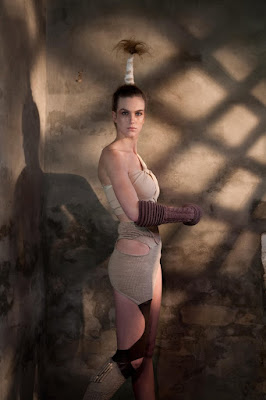 Please describe how you developed and refined your amazing knitting machine skills...
I think I was determined to conquer knitting, so I just kept at it, and before long, I really understood the fundamentals. I was always intrigued by the qualities of knitting, so I guess that helped me to strive to refine it. It also helped when I purchased a knitting machine for home, this gave me the time I needed to practise and develop interesting stitches and outcomes. So yes it was frustrating at first, but became a passion through practice and determination!

Could you please expand upon how body scarification is explored in Visible Markings?
I am interested in identity, and I suppose working with the concept of scarification and knitting, I found the two worked really well together. Knitting conveys so many messages through the stitch patterning and structure, very similar to body scarification, so I liked the idea of combining the two to create a new language. Some of the pieces that I have created for the exhibition look at the concept of knitting as a protective cocoon, other pieces rely comfort, or sexual maturity.

While I have used traditional stitches in some of the pieces, I have tried to reconfigure them through how they have been worked within the piece. Two types of traditional knitting I am particular interested in is Aran and Guernsey knitting.

For Aran knitting, the symbolic nature of the stitch patterns that feature within each sweater can vary from family to family. The amount of patterning that is knitted within an Aran sweater represents the number of males within a particular family group. On a male marriage into a family, the ornate textural pattern for the new member would feature down the centre front of the garment. After the birth of the first son, the design would widen with panels featuring addition design work to signify the expanding family unit. The patterns and motifs were inspired by Celtic metalwork, and is very three dimensional and sculptural in quality, with the patterns being symbolic and tell a story of everyday life.

With Guernsey and Jersey knitting (as known as a ‘fisherman’s’ pullover) the symbolic references of the stitch patterning reflect life by the sea. The coastal villages, which were mostly fishing villages, utilised patterns and motifs designed to represent seascapes and sea-life such as starfish, waves, beach pebbles, ropes, fishing nets, and diamond patterns that were used to promote success and wealth.

It is believed that each fishing village or coastal town developed its own style of stitch pattern and motif. This was used not only to distinguish the locality of the village itself, but the patterns also helped to identify the bodies of drowned fisherman found at sea. Initials of the wearer were often embedded into the background of the knitted garment for easy identification.

The elaborate patterns also indicated social status. Because individual families kept the same patterns and the village had few distinctive designs. The fisherman’s ‘gansey’ became a symbol of belonging. Stitch patterns such as anchor, cables, diamond, flags, herringbone, moss stitch, rope ladder and shells were combined in significant ways. The stitch patterns and their combinations was often the knitter’s interpretation of significant things in a fisherman’s life – his tools, his livelihood and the weather etc. 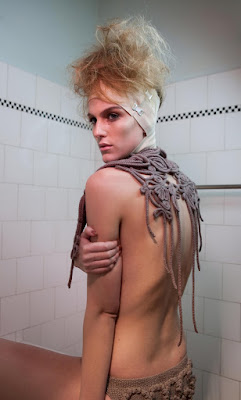 How do you think wearability, functionality and aesthetics play out in Visible Markings?
All of the pieces created are wearable to some degree. What I was hoping to achieve by creating the pieces was challenge how fashion has been traditionally been viewed on the body. I am interested in components of fashion, such as gloves, neck and shoulder pieces etc, rather than whole garments. I guess this all ties in with the research that I have undertaken regarding the perceptions of knitting and how is should work on the body. It is interesting that a lot of people still view knitting as something that should be completely function (wearable) and offer protection and comfort. I do try to think of all the pieces individually and how they will work on the body, plus the messages that they can convey, but I suppose there are more pieces that say a lot more than others, such as arm sling (pictured below). 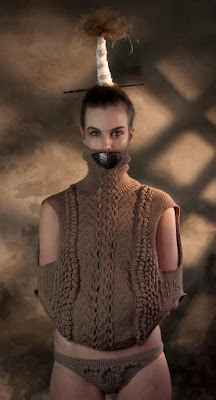 Who inspires you?
I am inspired by artists such as Caroline Broadhead who works with knitting as a medium. Her work utilises a variety of materials such as human hair etc. to create messages that repulse, but also intriguing. Liz Collins is another designer who I admire. Her work involves knit and fabric together and plays with process of shrinkage. The technique of making that she uses allows her to combine a variety of textures and weights which challenge the silhouette and how a garment works on the body.

Another reference is Rei Kawakubo (Comme des Garçons), while her work is not always knitted, I am fascinated with how she deconstructs the notions of fashion and how garments should be seen on the body. Vivienne Westwood also always challenges knit. She has a fascinating way of borrowing traditional stitch patterns and reinventing them, such as Argyle knit. 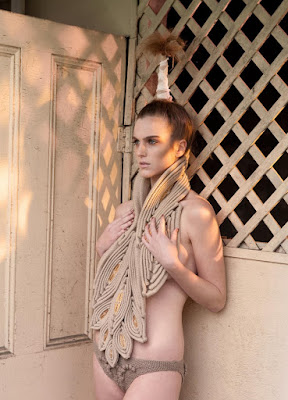 What is your favourite yarn to work with, and do you have a favoured technique of knitting?
I enjoy working with Australian wool. It has these amazing qualities in that you can mould it, manipulate it. Knitting with wool on a knitting machine is enjoyable, as it can be distorted/manipulated as you knit. You can adjust the tension, transfer stitches, catch stitches, drop stitches, and due to the slight elasticised quality, can be steamed after kitting and manipulated in/or out of shape.

Knitting the tucks as in the neck pods (pictured above) is an interesting process. It involves endless counting of stitches, catching them up to make the tuck and 'short row' knitting (which is a method of partially knitting an area of a garment, such as what you see in socks -heels and toes). All the pieces are fully fashioned, and the process that I go through to design and make the pieces, involves firstly draping knitted lengths of cloth on a mannequin. From here I manipulate and cut it away to form a shape or silhouette, and then once I have what is referred to as a toile, I then can created the paper knit patterns, which I draft on graph paper to scale.

So the process of making can be very time consuming, especially since I still work by hand. Some of the pieces I sometimes machine knit, and will also create a hand knitted version. It is interesting seeing the differences, just using a different process of making.Machine knitting tends to be quite even, while hand knitting, can be a bit more uneven and a bit softer to handle. 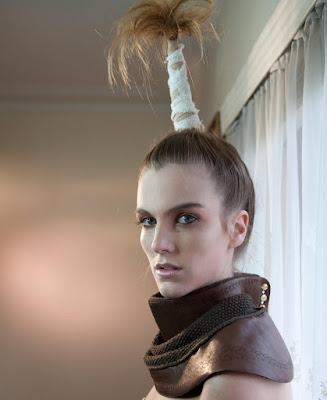 And finally, what is your idea of a perfect setting for knitting?
Anytime I have free time is great for knitting! I generally work from home and set the knitting machine up in the kitchen so I see everything that is going on! I do need a clear space and head to knit, but enjoy knitting at any time of the day or evening. I do like to start and finish a project, rather than have multiple projects on the go, this way, I can solely focus on making the one pieces, without becoming too influences by other ideas or techniques. 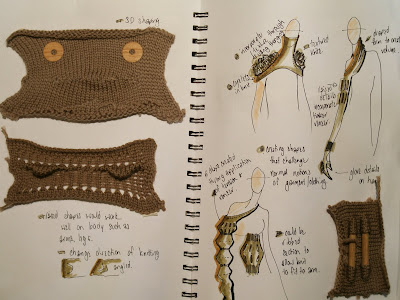 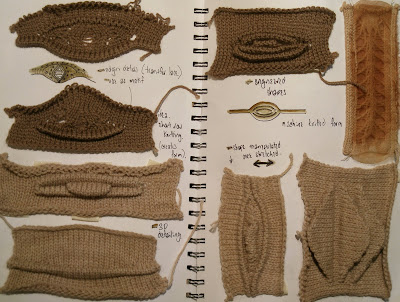 Alana's exhibition is on in Gallery 3 until Saturday 25 August.

these are such beautiful sketches!! and a great blog -- many cheers! Xo OLJ