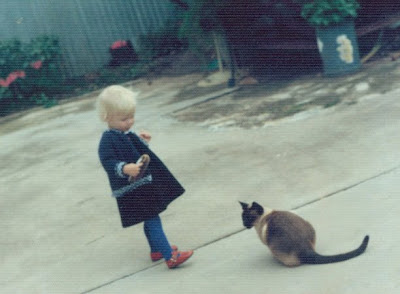 Taken Easter 1979 in St Arnaud (Victoria) with Dixie. I am almost four years of age.
It is the layout I remember first, the long passageways created. When I think of my grandparents’ garden in St Arnaud, it is a garden laid out in three long rows, allowing you to walk the length of the bed from either side, picking peas or hoeing turnips. A grapevine that ran the length of the three sides framed the garden whole, a neat belt to its green corridors. It may not have been so. It may not have been quite so long. For that you will have my memory to take. I recall it thus; it was thus. Memory is not for the factual reliance when it comes to any book stored in the mind.

There was sun suspended perpetually high above. There were plants taller than my height of five years lived, stretching the length of their wooden stakes, giving all the appearance of puppets pulled from high. Green beans grew and strawberries could be surreptitiously picked by hand. There were no leaves brown or laced with holes. It was an immaculate functioning garden and it belonged to Frank and Thelma. By their hand, it flourished. Cauliflower, carrot, potato and tomato, they were all there, vegetable peel from the kitchen, and tealeaves too, a composting role to play.

Seems this Thursday I am thinking of things past. Soon also to be relegated to halls of memory, our show at Craft Victoria and our artists’ books on display as part of the 2009 Geelong acquisitive print awards. The former draws to its close this Saturday come 5 pm, the latter the following day. 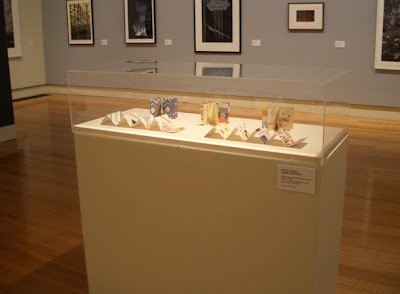 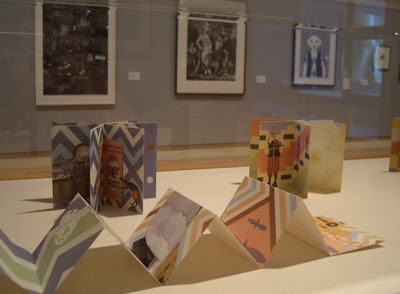 In a cabinet in the Geelong Gallery they sit, two concertina bindings of ours unfurled at full length, three fanned in shape of a star. 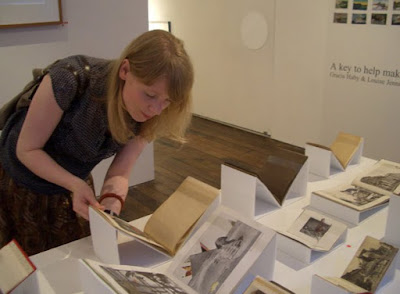 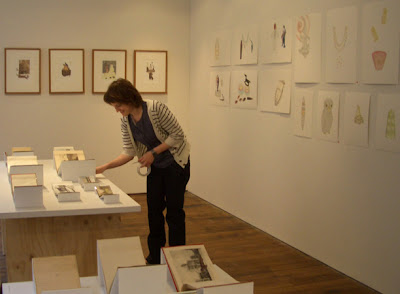 We pop in to turn the pages once more, and will miss doing so come next week.
Until next time,
G
From Craft Victoria

My family grew up in St Arnard. Left when I was one but I feel the urge to go and visit.
Vanessa