Tell us a bit about yourself, where you grew up, what was your childhood like, what prompted you to study jewellery at NMIT?
I grew up in South Melbourne and then in Dromana on the Mornington Peninsula – we lived in very unusual houses with beautiful gardens (my father is a gardener). Our family travelled frequently and my first memories are of Greece when I was four. We were very lucky to be exposed to so many different cultures from such a young age.

I studied sculpture earlier and was constructing room-sized installations before I moved into interior design. Interior design essentially led me to jewellery. I became obsessed with working at a smaller scale through model-making. I’m much happier working at this miniature scale. I find it a very accessible as I can imagine, design and construct everything myself from scratch without having to involve anyone else. Jewellery is so immediate and satisfying in that way.
I also met my good friend Kim Wearne (of Bonfire Folk) through Interior Design. We were teaching interior design and on the first year camp together when she suggested I do a jewellery short course. For some reason before that I had never considered it as an occupation – I had only been an avid collector of jewellery. It seemed like the perfect way to consolidate my previous interests of sculpture and interior.
Below is a model of my thesis project for Interior design. The building was covered in zinc shingles which shimmered in the wind – which were inspired by the 70’s sequin coke billboard. The design was inspired by devices of camouflage and le Corbusier’s building the Unite de habitation.

Your metal jewellery is quite aesthetically different to your perspex work. How does your approach differ between the two?
The acrylic necklaces are derivative of a large scale neckpiece I completed in final year of TAFE at NMIT. After designing the facetted mount for the crystal - I replicated the triangular facets to create the form for the chain.

The 'fiction' range is a series of experiments with elements of geometry. It is inspired by camouflage and illusion. It is a production range of my more elaborate work which is stocked at Pieces of Eight. The 'fiction' work enables me to experiment with more accessible materials and processes such as laser cutting and casting so I can keep the costs of the pieces lower. 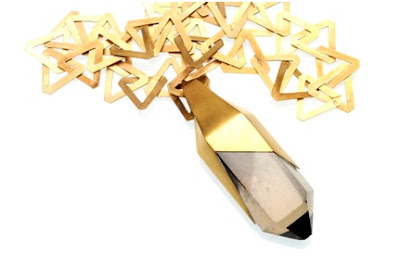 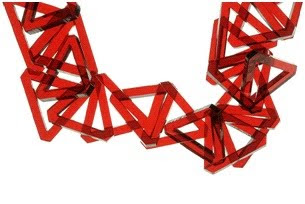 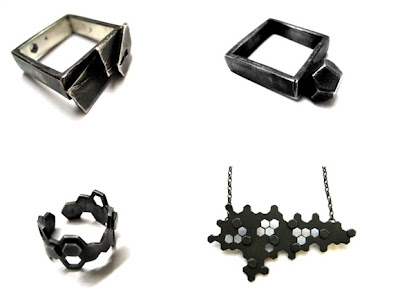 Do you recall what was the first piece of jewellery you made? Could you please describe it, and where is it now?
When I did the short course I made a series of card sketch models of rings I wanted to fabricate. I was very inspired by the work of Mari Funaki at the time and wanted to invent and frame spaces around the finger. The first piece of jewellery I made was a silver ring. I liked that it was a continuous folded strip. The end of the strip was riveted in place. I think this ring is at the bottom of my drawer in my workshop somewhere. I wore it all the time just after I made it but now I think it’s clumsy and all the proportions are wrong. 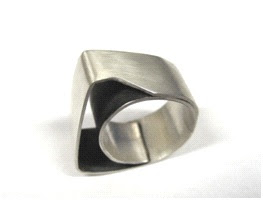 Now that you’ve graduated, what do you hope to achieve next?
I am hoping to continue making jewellery because I enjoy it so much. I want my practice and business to be profitable and self supporting so I can continue doing it indefinitely.

Last semester I taught a jewellery based studio with Djurdjica Kesic (a good friend and artist from Pieces of Eight Gallery) in the interior design department at RMIT. We titled the studio ‘wonder’ and it explored a miniature scale for interiors through the production of jewellery artefacts. The students produced some really extraordinary pieces for the studio which was very inspiring and rewarding. Teaching is very complimentary to my practice as I find it very isolated making work alone in my studio all the time. 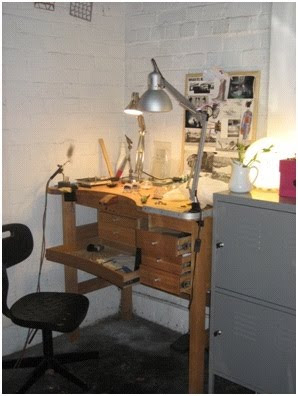 What gets you in the mood to create?
I had my first solo show in 2009 at Pieces of Eight gallery titled Fabrication. The was show was a series of jewellery inspired by the natural forms of minerals. I constructed a series of rings which are assembled from cast mineral specimens. The structures of these minerals are extraordinarily beautiful – they often grow in very pure geometric forms that look artificial or manufactured when they are in fact naturally occurring. (i.e. tetrahedrons, cubes, octahedrons, dodecahedrons and icosahedrons). Many of them resemble a form of miniature architecture. I imagine them operating at contradictory scales - like tiny buildings or even fictive cities. When these rings are presented as a cluster they draw you in and evoke a world of science fiction. 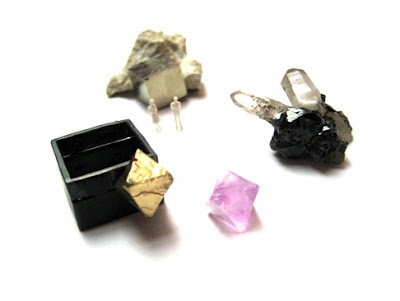 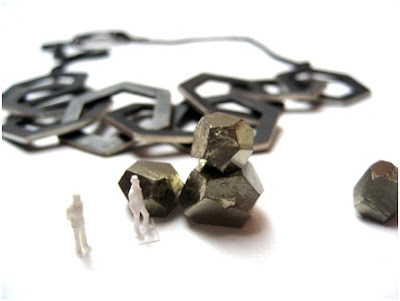 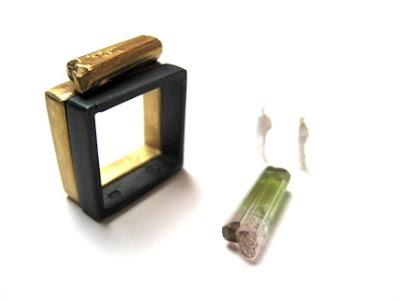 Images from Fabrication exhibition at Pieces of Eight, September 2009 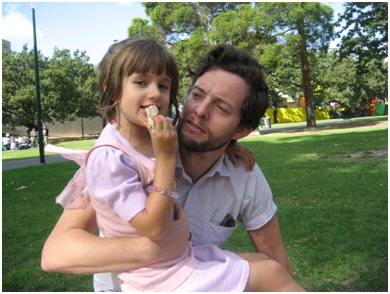 And finally, what’s one thing you can’t live without?
My lovely boyfriend Steven and my beautiful daughter Mila. I couldn’t imagine life without them.
From Craft Victoria

I love her pieces - I was so sad I missed her exhibition last year!