Anna Davern is the very lovely subject of this week's Introducing. Her current exhibition Buena Vista in Gallery 3 is on till October 25 and you can view more images of her work in this previous post, as well as the accompanying exhibition essay written by Erica Sanders which you can view here. Anna isn't just a tin tinkerer (heaven forbid the thought!), but a highly skilled artist who has mastered the art of metal collaging.

Without further ado, here is our conversation with the very talented Ms Davern. It's guaranteed to illuminate and inspire! 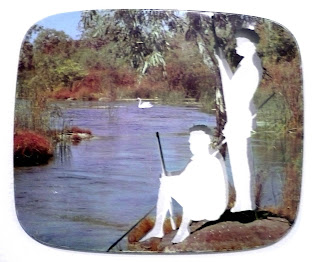 Absent I (small swan), 2006, tin placemat, chocolate tin
What is the significance of the exhibition title Buena Vista?
Buena Vista has a double meaning in relation to the exhibition. Of course, the literal translation 'Beautiful View' relates to the idea of landscape and this exhibition is an investigation into the Australian landscape and its role in defining an Australian cultural identity. And Buena Vista also makes reference to my exhibition of 2005 held at Craft Victoria titled Beaut. When I say the title of the exhibition I pronounce it Beuw-na (rhyming with tuna) Vista as this is what we called the local pub of the same name when I was growing up. The choice of font in the signage is the same as the font on the front of the old deco pub.

So many people have been asking how you are able to cut such precise lines into tin! How do you do it?
Practice! And very fine sawblades. I use a 7/0 sawblade which will only mean anything to other jewellers. I need to use a loupe (magnifying eyeglass) to see which direction the teeth go on the blade so I can put it the right way up in the sawframe!
How long does it take to complete each work? Do mistakes happen often?
The time taken varies with each work, particularly as I might take the tin down the journey of a particular narrative but then change my mind and change the direction of the story. But as an example, to cut out just the lid of Spook (pictured below), which has the Arab on the horse and the koala hiding in the tree, took me 2 days of solid saw piercing. Mistakes do happen and they can be very frustrating as when you are working with found objects, you only get one chance to cut out the right thing.
What is the most fun/frustrating part of the process?
The most fun is when I'm trying to work out what story I want a particular tin to tell and I come across an image in another tin which will tell that story clearly and succinctly. The most frustrating part is the neck and shoulder pain.
What is the significance behind the recurrent motif of the cut out duo (pictured above in Absent I)?
In the catalogue essay to Beaut, Robyn Phelan wrote of the kangaroo brooches made from found biscuit tins: "Muster is not all-inclusive. It reflects a colonial view from the shade of the veranda, compulsory cup of tea at hand. Indigenous representation is not available in the narratives promoted by the manufacturers of these tins nor those collected by the craftsperson."

However, I did have an old cork-backed tin placemat with the image of the two indigenous figures sitting on the rock. But I felt that it was an important image that I could not deal with in the light-hearted manner of the kangaroo muster. I was concerned about the display of images of indigenous figures who may be deceased and how this can be offensive to the indigenous population. And I also questioned my entitlement to address 'the indigenous issue'. By removing the figures I was able to address both of these issues. In one or two of the works the figures that have been cut out have been turned around and attached face-down on to another tin.
Do you have any anecdotes regarding Buena Vista?
I went through a packet of bandaids in the last 3 months and for the last six weeks I was going through a gross (144) of sawblades a week! I also like that the negative shape in the tin left over after cutting out the picket fences resembles a Persian decorative pattern. Puberty Blues is one of my all time favourite movies and the title of the work with the surfers is a quote from the movie when Debbie goes to get a Chiko roll for her rat boyfriend, Bruce, and is told "And don't take a bite of it orright!" Incidentally, Puberty Blues is set in Cronulla which is also where the race riots occurred in 2005.

Last, but definitely not least, who would your dream collaboration involve?
The Brothers Quay. 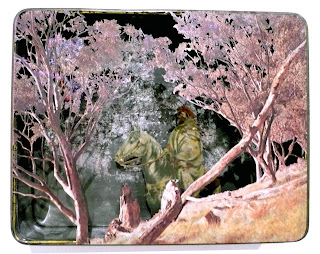