This week CLOG is ultra-excited to be presenting this interview with current exhibitor, Lisa Walker - it's something we know many of you have been waiting for!

For more information and images, do visit our previous posts here, here and here. Without further ado, presenting Lisa Walker! 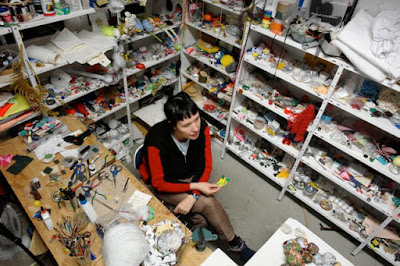 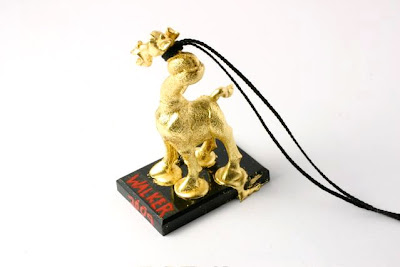 Your jewellery often features quite complicated forms. Could you please describe how you go about creating these objects... Is it a quick and instinctive process, or something more measured and painstakingly constructed?

There´s not just one answer to that question because how my pieces come about is dependant on a lot of things. A recent example – a pendant made up of a plastic figure from McDonalds, standing on a small platform, covered in gold leaf (pictured above). The figure is a giraffe with a knot in its neck, quite a meaningless stupid looking thing taken from a character in a popular animated film a couple of months ago. I was interested in the presence the giraffe had, aesthetically it was quite beautifully done, and I immediately recognised that this object had a special quality about it. It also had some political references regarding McDonalds, capitalism, exploitation of kids. This isn´t to say that I specifically want to comment on those issues, but when an object emcompasses aspects I´m interested in, in an odd way, then I´m immediately drawn to it. First I just plaited some thread and tied it around the giraffe´s neck, signed my name on the bottom, finished I thought, though I wasn´t totally sure about the result. Then a few weeks later I covered the figure in gold leaf, signed over my name with larger red letters, now it´s finished. The colours of gold and black with the red writing have transformed the piece into something really good that I´m convinced about!

As far as tempo goes there’s also not one answer to that – I can make a piece in a few minutes, but it may lie around for years before I recognise its qualities, then take more time to become a wearable piece of jewellery. Or there may be pieces that take two weeks to make, very slow monotonous work – a recent necklace was like that, it took nearly two weeks for me to drill tiny holes into about 800 small plastic body parts, and plait a very fine red thread (pictured below). 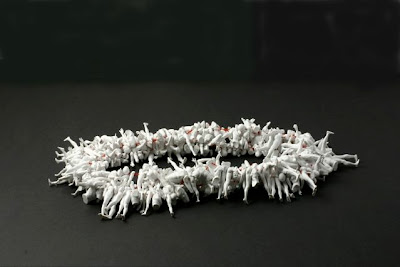 Could you tell us a bit more about your time in the central Australian desert in 1991, when you set up a jewellery workshop there? It must have been a memorable time for you.

I worked in a few roadhouses in Australia, firstly in a place called Glendambo just north of Port Augusta for about 2 months, to save money to keep travelling. The work was things like pumping gas, serving in the shop, waitressing, cleaning the hotel, stuff like that. I met rednecks for the first time in my life, that was an eye opener. Then Mt Ebenezer roadhouse which is on the Lassiter Highway on the way to Ayers Rock for a couple of months. That´s where I set up the first little workshop, a turned over beer crate with a peg nailed on. And finally at Kings Creek Station which isn´t far from Kings Canyon. In between I spent about 18 months in Asia, and travelled and worked too around England and Scotland. Mt Ebenezer was aboriginal owned so I was working alongside a lot of aborignal people. They used to sell their paintings to the tourists for $20 outside the roadhouse, and were only allowed to buy 6 cans of beer a day, a lot of alcohol and glue sniffing problems. The women asked me to buy them perfume when I went into Alice Springs. We used to make the biggest scones and lamingtons in Australia (so we were told), and bake kangeroo pies. The aboriginal community that owned the roadhouse was relatively new, made up of outcasts from other communities, a lot of problems. The area around the roadhouses blew my mind, there is absolutely nothing like this landscape in New Zealand. In the little workshops I set up I made pieces influenced by my experiences there, I wanted to show these pieces at Craft Victoria but couldn't find them! A friend at Workshop 6 in Auckland has just found them while cleaning out the workshop. 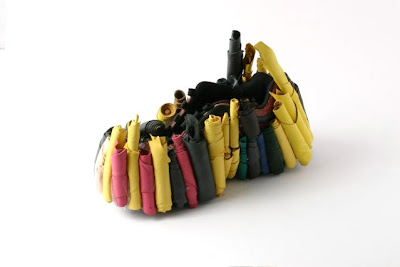 Object, 2008 (Leather, shoe)
Over the course of your career, you've stretched, examined and dissected the limits of jewellery to their (seemingly) utmost extent. What's next for you?

Size has been an issue of late, having the desire to make bigger work and look at what is possible there (pictured above). My huge necklaces satisfied that for a long time but not any more. So as a jeweller there are a lot of issues I have to consider. This is part of the wall text at Craft Victoria –

Am I allowed to make an object that suggests jewellery but isn’t a piece of jewellery? I’ve always been so careful to land within the jewellery square, this has been very important for many years. What happens when I start to step outside of that? Where or how or when does the issue of sculpture come in? Do I have to be so careful? I have a lot of questions, and these pieces are about those questions.

I’ve been making a lot of jewellery the last two months though, and no more larger objects that are too big to be jewellery. Those pieces are sitting quietly on a table to be stared at now and then. I’ve just made a huge pendant that is wearable and a lot bigger than any of the objects that are too big to be jewellery (pictured below). So now I’ve totally confused myself, ha ha, not really. I think this is all just part in parcel of my work, it intertwines and influences itself, and it doesn’t surprise me at all that I have to push that size boundary now and then. I recently read an article about Martino Gamper who is a designer/maker from southern Tirol but lives in London, he makes amazing work, and said that the functional side of his chairs is very important, OK they may not all be comfortable to sit on, but you can sit on them. So I read something like this and begin to feel on the one hand uncomfortable at my hesitant foray into larger things that you can’t wear, but recognise on the other hand that this is a necessary process in my research. It could very well be that this look at larger objects actually reconfirms my decision to be a jeweller. 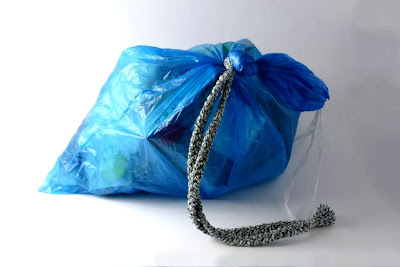 Pendant, 2009 (Rubbish, rubbish bag, string)
What puts you in the mood to create?
I have two children so can't afford to hang around until the mood takes me, I've learned to put myself into the mood. This is usually done just by making, I begin whether I know what I´m doing or not, and on it goes from there.

What is the biggest insult anyone has ever paid to your work?
'What a crock of shit', heard that from an old woman at an exhibition who didn´t know anyone could hear.

And finally, what is the best piece of advice someone ever told you?
'Keep interested', Matthew von Sturmer told me that years ago.
From Craft Victoria