Today CLOG is excited to present an interview with current Gallery 2 exhibitor Natasha Dusenjko. Featuring delicate porcelain spindles with lines of paper wrapped around them, Natasha's exhibition Babel is a show that you must have a look at up close.

Babel follows on from Natasha's word-based ceramic work Bone Ancestor II that was accepted as a finalist in the 2009 Manningham Ceramic Art Award. 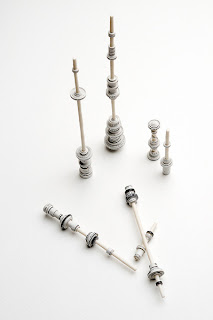 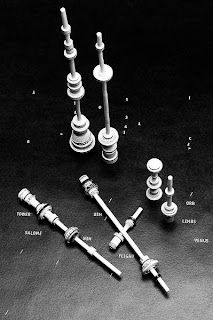 In your artist talk you mentioned that Babel is an edited version of bone ancestor II. Could you tell us a bit about this?
Babel is very much related to my earlier work bone ancestor II, therefore it made sense to build upon the textual concepts of that particular work, expanding on the sensibilities of forbidden or buried texts. I have consistently worked with concepts which are interrelated, so there is a definite relationship from one work to the next. Editing the text would make it new again. It was also an experiment in how much it could be chopped up and deconstructed, yet still contain it’s original core.

The Material Poem, edited by James Stuart, is an e-anthology of text-based art and inter-media writing, which is now also available as a printed publication. http://www.nongeneric.net/ 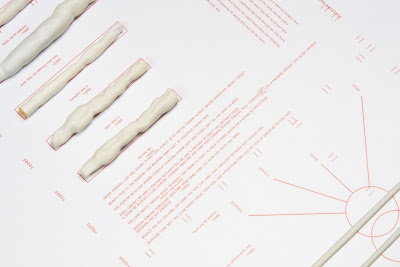 Initially you started studying graphic design before changing your focus to ceramics. How did this affect the way you approached ceramics?
I have a background in graphic design and printmaking, even though I enjoyed working within these areas, I was also becoming frustrated with flat surfaces and had a real desire to work on a more sculptural level. I would find myself cutting up prints and folding them into objects and packages. My hands needed to get busy in an entirely new way. Sculptural work provides an intricate tactile process. In regards to ceramics, the lack of knowledge relating to its technical processes has allowed a particular kind of freedom. The ability to concentrate on the conceptual aspect of my work, without the potential hindrance which an overt technical knowledge may have created. I think this is an important factor relating to the direction in which my work has evolved. The marriage between various disciplines which have formed my training in art and design, is becoming more apparent in my work.

Do you think Babel is the final evolution of your exploration, or do you hope to continue working on it in the future?
I don’t think there will ever be a final evolution of my exploration! Each work that approaches resolution, re-opens enquiry anew. I am looking forward to beginning a new project, and the possibility of a new text arising out of that process, its point of departure will be Babel.

Could you please tell us about the technical side of creating the works in Babel. It must have been quite time consuming, given their small size!
There are various different aspects in the making of this work. Map 1 and Chart 2 were created in a program called Indesign. Both the layout and Black & White palette are influenced by ancient star charts. I did begin with an idea about how to create these charts, but it is often the mistakes and discoveries that only happen in the making that determine the final result. This is an aspect of the work I really enjoy. The layout of the text and graphics which would later be sliced and rolled, were also created in this way.

The sculptural aspect incorporates two processes. The first, involves sculpting the bones from porcelain. I am not, at any stage sculpting towards any definite or predetermined form. Rather, the form emerges through a playful process, allowing an intuitive conversation to occur between the material and myself. After a period of time, my fingers become fluent with both the nature of porcelain, and these bone-like forms. Alternately, the long thin spines are created by simply rolling the porcelain into ‘snakes’. This is a very child-like motion, but also requires a sensitivity and control in order that the porcelain doesn’t dry out and crack. After firing, all these pieces are individually polished using various grades of sandpaper.

The second, involves intricate work and is much more time-consuming. This process involves slicing up lines or slabs of printed text and then rolling these strips of paper around the porcelain bones. Each individual form is built up by the continual layering of these paper scrolls. Every Babelbone and Tower is an exercise in composition and balance. As always, some are more satisfactory than others!

And yes, it has been a very busy 6 months! 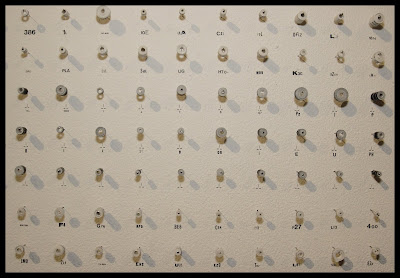 What has been your proudest achievement so far?
The exhibition of my latest work Babel, currently showing here at Craft Victoria. I think Babel is my most articulate work. 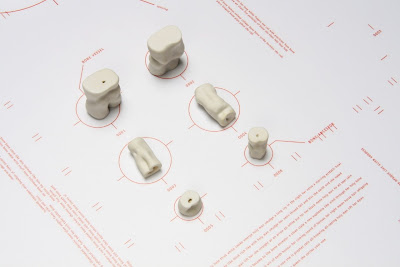 And finally, what would your dream collaboration entail?
Sound, definitely. Sound and light. I have been interested in working with a sound artist for some time. Sound has the power to conjure on a completely different level; it can be a very physical experience.

In terms of an artist, I immediately think of Patti Smith. Her words, music and poetry have definitely been an inspiring influence. I respect the intensity in Patti Smith’s work. The reckless beauty, passion and visionary relationship with what I would describe as the Muse. Her installation The Coral Sea at Anna Schwartz Gallery (2008 Melbourne International Arts Festival) was particularly moving; I was enveloped and mesmerised by the visceral sounds and dark liquid imagery. 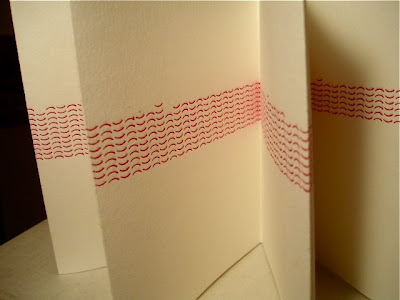 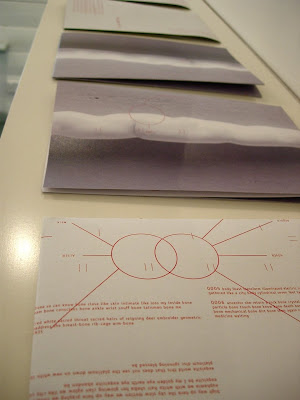 To view more images of Natasha's exhibition Babel, click here. For an excellent article about the exhibition written by Natasha and published in the May issue of Trouble magazine, click here.

Babel will be on show in Gallery 2 until 13 June.