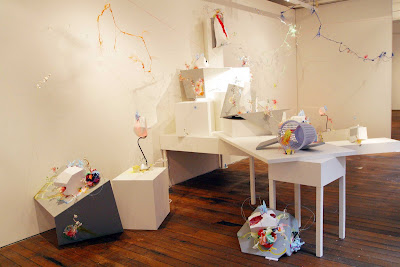 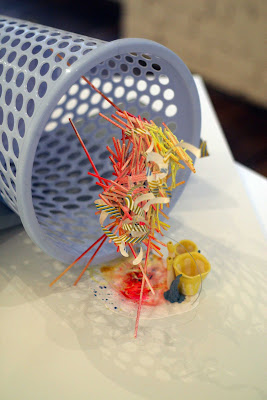 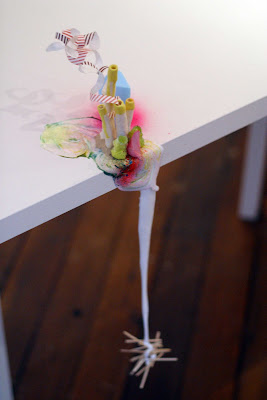 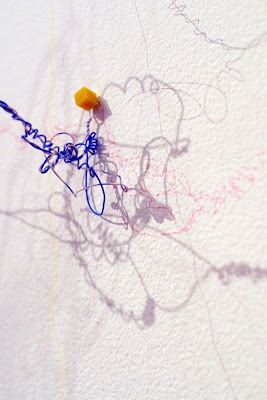 Nathan here again with a few notes about my current show and some shots.
The show is called ADSR or Attack, Decay, Sustain, Release after the four factors used in sound sythesis to control the amplitude envelope (the shape of a sounds volume).
This set of works coincides with my recent interest in synthesisers and the modular way they make sounds from a singular set of processes. As well an increasing interest in/knowledge of materials and processes used to modify them.
The show features an installation which is designed to be episodic with each of the pieces on the grey planes utilising the same set of basic materials but developing in different ways then efervessing upwards into tangles lines of wires and strings which loosely interlink them thoughout the space. The works are spread out on roughly stacked plinths integrating in to the gallery yet skinning over it.
The sculptural works were designed at the same time as a sound piece which will be presented in four channel and which also moves episodically from bass tones which progress through a series of filters and to form the higher tones. The piece moves between the raw synthesized piece and a version of the piece recorded in the space contrasting the spatial changes between a piece in conception and a piece in a location. A sample can be downloaded here
Attack Decay Sustain Release by Nathan Gray
17th of September from 17th of October
Craft Victoria
31 Flinders Lane Melbourne 3000
catalogue essays by Francis Plagne, Jared Davis, James Deutsher, Simon Taylor and Helen Johnson download here or free at the show
ps heaps more pictures at my site www.undodesign.com
From Craft Victoria