As a special mid-week surprise to brighten your day, CLOG is proud to finally present what everyone has been asking after - a Q&A with Stephen Gallagher, jeweller extraordinaire!

For more images of Stephen's current exhibition, do visit previous posts here and here. Stephen recently returned from a residency in London and this exhibition presents his latest masterpieces. 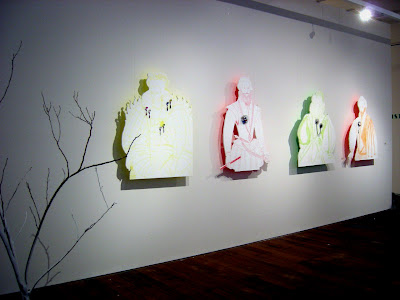 Your current exhibition is influenced by the Elizabethan era. What drew you to this period, have you always been interested in it or was there a particular spark that attracted you?
As a child I was drawn to learn about history. An early trip to Europe enabled me to view some of the various styles of the Renaissance, a memory that never left me. The main spark for me was watching the movie Orlando, after this I became quite obsessed. I am drawn to this period for many reasons but mainly the excess of dress and decoration. This was the age of discovery, of new poetry styles such as the sonnet, of favourites. It was a ‘Golden Era’, a time of swashbuckling pirates, of new world riches, a new religious structure and the formation of our modern day spy system and at its head a powerful virgin Queen dictating fashion, the more I research I did the more intrigued I became.

Please introduce the characters you used to display your work on. How did you assign them their colours and did it take long to make? They're great renditions!
Thanks! Time is no issue. I have set up my own court: at its head is Queen Elizabeth I (in blue for blue blood which is a colour often associated with religion (namely the Virgin Mary) and masculinity (Elizabeth was known as a Prince) .

Next to her is the Earl of Leicester, Lord Robert Dudley, Elizabeth’s favourite (in pink for his dandyism, this was a time when men dressed more excessively then women) On his left is Sir Walter Raleigh, another of Elizabeth’s favourites and in competition with Dudley for the Queen’s affection. He is in orange for he was the hero of this the ‘Golden Age’, a great Privateer (AKA pirate) and discoverer of the Americas for England.

Next is Countess of Essex, Lettice Knollys, a cousin of Elizabeth and lady-in-waiting. She went on to marry Lord Dudley and became Countess of Leicester, causing a great scandal at court which resulted in them both being banished from court. Lettice is depicted in green for envy for she was always envious of the relationship between Elizabeth and the Earl.

Depicted in red is the second Earl of Essex , Robert Devereux, a later favourite of Elizabeth. He was a bit of a hothead and depicted in red because of this and also because at his death he became a martyr for chivalry (he was be-headed at the tower for treason after leading a revolt against Elizabeth’s council).

Next is Mary Fitton a maid-of-honour, an outstanding beauty and the ‘Dark Lady’ of Shakespeare’s sonnets (in yellow for cowardice and deceit). She was disgraced as a result of her liaison with the Earl of Pembroke. All are taken from portraits, some my favourite and inspirational and I find it interesting the changing shape of fashion from the different dates.

You were recently in London on a residency program, it must have been an amazing experience!
Yes, the OZCO London Studio. It was amazing and a dream come true. With three months to immerse myself in Elizabethan-ness, it gave me the opportunity to spend time with collections and visit various houses of the period to view objects in situ, to walk in the foot steps of Elizabeth, to view the incredible funeral monuments, and research the textiles, jewellery and paintings of the period. Simply amazing!

In your artist talk during the opening you mentioned that you were exploring colour in your jewellery again. What prompted this?
I must say that I believe it was from viewing the wonderful colours within the textiles of the period, all natural dyes, most over 400 years old and still incredibly vibrant. Prior to this my research was mainly from black and white copies. In London I was able to research the Cheapside Horde at the Museum of London with its amazing collection of jewels, gem stones and bright enamels; this was not a dull time for the Elizabethans, colour and movement was everywhere.

Do you have a favourite piece in the exhibition, or are they all dear to your heart?
A favourite? Hhhhmmmmm they all are, as there is so much more behind them that meets the eye, each holds a little secret, a SG fantasy!

What would your dream collaboration be?
Many dreams, with fashion, with dance, with scale. I think with someone with the same passion but in another medium that we can bounce of each other and create an object that is completely new to the world, contemporary but harks on history.
From Craft Victoria